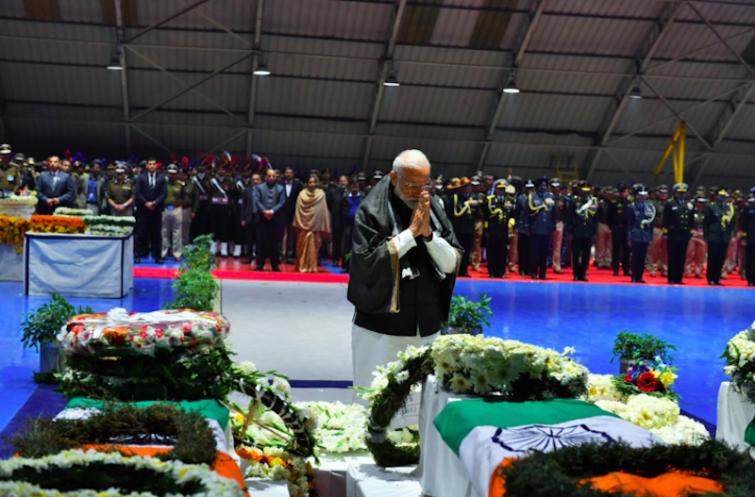 After the salute the minute of silence, the Prime Minister went around the coffins with folded hands.

The bodies will be sent to their respective homes on Saturday, reports said.

Bravehearts of CRPF who made the supreme sacrifice and attained martyrdom in the Pulwama attack on 14/02/2019. pic.twitter.com/eHrPnYaSGV

India has said it will do everything in its power to ensure Pakistan is isolated by the international community. This comes in the wake of 40 paramilitary personnel being killed in a terror attack in Kashmir's Pulwama area.

Reports citing sources said Gokhale has met envoys of the five permanent members of the United Nations Security Council (P5) — US, China, Russia, the UK and France — apart from important nations in Asia and Europe on the matter.

Referring to the attack as "a matter of grave concern", Pakistan has, however, denied any link with the attack.

"We have always condemned heightened acts of violence in the Valley. We strongly reject any insinuation by elements in the Indian government and media circles that seek to link the attack to the State of Pakistan without investigations," Pakistan said.

Responding to the incident, India this morning withdrew the "Most Favoured Nation" status to Pakistan.

On Thursday evening, India had appealed to the international community to "support the proposal to list terrorists, including JeM chief Masood Azhar, as a designated terrorist under the 1267 Sanctions Committee of the UN Security Council and to ban terrorist organisations operating from territories controlled by Pakistan". The hint was primarily to China, which had blocked India's efforts of listing Azhar as a global terrorist by the UN Security Council.

Though China has condemned the attack in Pulwama, it has not changed its stand on the Jaish-e-Mohammad chief.

Several other countries, including the US has backed India and stressed on the need to act against the perpetrators of such terrorism.

The US State Department said the government was committed to working with the Indian government to combat terrorism in all its forms.

"Pakistan-based terrorist group Jaish-e-Muhammad has claimed responsibility for this heinous act. We call on all countries to uphold their responsibilities pursuant to UN Security Council resolutions to deny safe haven and support for terrorists," read the statement issued by the US government.