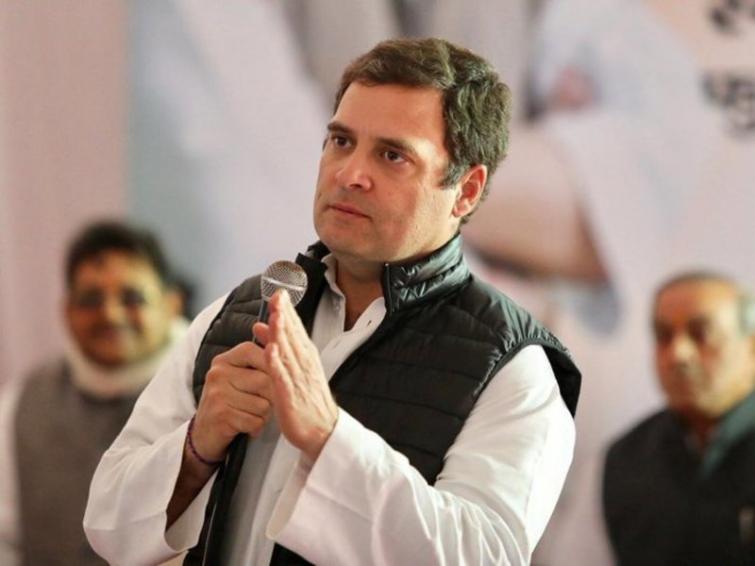 New Delhi, Feb 13 (IBNS): Congress president Rahul Gandhi took a dig at Prime Minister Narendra Modi following publication of The Hindu report on Wednesday claiming the Rafale deal (buying of 36 fighter jets from France) signed by the BJP government was not on "better terms" than the one was made by the UPA government.

The Hindu's third report on Rafale also stated that three Defence Ministry officials, who were the domain experts on the seven-member Indian Negotiating Team (INT), concluded that the delivery schedule of the first 18 of 36 jets in the new deal was slower than the original procurement process.

Rahul, who will address a press conference over the latest report at 3:30 pm., tweeted, "The PM defended his personal RAFALE bypass deal on 2 counts : 1. Better Price 2. Faster Delivery Both have been demolished by the revelations in the Hindu today. "

The PM defended his personal RAFALE bypass deal on 2 counts :

Both have been demolished by the revelations in the Hindu today.

Watch my LIVE Press Conference on the #RafaleScam at 3.30 PM today. https://t.co/IzyCaHeyIM

The latest report by The Hindu is contradicting with the BJP government's claims of a cheaper deal and faster delivery of aircraft under its regime.

Under the Congress-led UPA government, which ruled the country from 2004 to 2014, India has signed a deal to buy 126 Rafale fighter jets.

Last week, the Hindu furnished a document to claim that the PMO (Prime Minister's Office) held parallel parleys with the French government prompting the Defence Ministry to object to the separate talks.

The Defence Ministry's objection has been quoted by The Hindu, "We may advise PMO that any Officers who are not part of Indian Negotiating Team may refrain from having parallel parlays [parleys] with the officers of French Government....in case the PMO is not confident about the outcome of negotiations being carried out by the MoD, a revised modality of negotiations to be led by PMO at appropriate level may be adopted in the case.”

In another report published this week, the newspaper said the Indian government made some unprecedented concessions to France in the Rafale deal.

Days before the signing of the deal, as the newspaper reported, India dropped provisions for anti-corruption penalties and making payments through an escrow account.

Hurling attack on the Congress, she accused the opposition party of playing a corporate warfare.

The BJP on Saturday alleged that the Hindu and the Congress chief furnished the document by cropping, leaving out then defence minister Manohar Parrikar's statement in which he had asked the officials "to remain calm and had assured that everything was going alright.".

News agency ANI tweeted the full note of the defence ministry soon after the first report of The Hindu came out pointing out PMO intervention in the defence negotiation.

Ravi Shankar Prasad also brought in picture the Airbus, whose internal e-mail was cited by Rahul Gandhi to attack Modi, saying the European aircraft manufacturer is under a needle of suspicion in deals finalised during the previous Congress-led government.