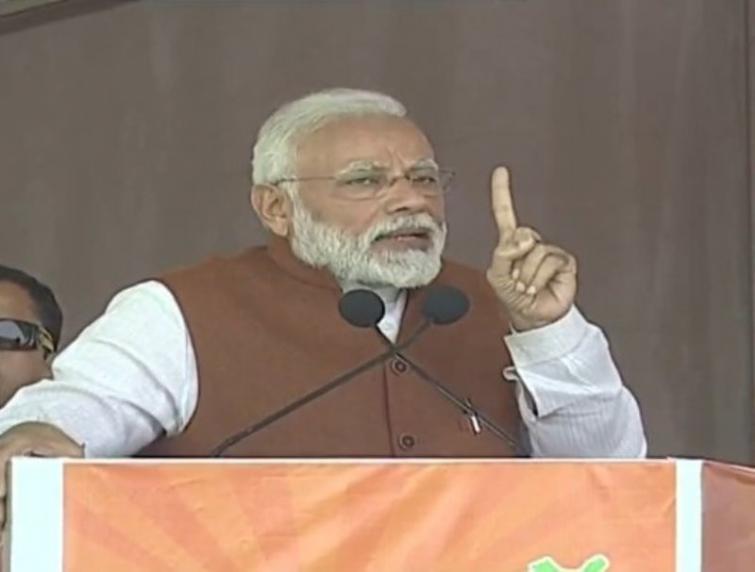 Chandrababu Naidu creating wealth for himself even as AP suffers: PM Modi

Guntur, Feb 10 (IBNS): Prime Minister Narendra Modi on Sunday slammed Chandrababu Naidu during his address at Guntur rally and said the Andhra Pradesh Chief Minister is creating lots of wealth for himself and his son while the state suffers.

Speaking at the rally, the PM launched a fierce attack on Naidu and said: "One must admire Chandrababu Naidu Garu’s honesty. He says he is a wealth creator! He’s obviously creating lots of wealth for him and his son while AP suffers. We are patriotic Indians...we are only thinking about the nation. Creating wealth is never on our minds."

Modi said the people of Andhra Pradesh have seen the true colours of Chandrababu Naidu.

"My ‘senior’ in politics, Shri Chandrababu Naidu obviously has lots to hide. Else why won’t he give an account of what his miserable Government has done for Andhra Pradesh," said he.

Modi claimed that the Centre has left no stone unturned for the state’s progress but the priorities of the TDP are different.

Taking a dig at TDP leaders for protesting against his visit to the state, Modi said: "I thank the TDP cadre and their leader for wishing what every patriotic Indian also wishes- that Modi goes back to Delhi and once again becomes the Prime Minister! I guess they have read the writing on the wall!"

Protest against Modi's visit in AP:

As PM Modi landed at Vijaywada's Gannavaram airport in Andhra Pradesh on Sunday for campaign, he faced several protest across his way.

On landing, he was received by the Governor and breaking the protocol, no one from Chief Minister Chandrababu Naidu's cabinet was present at the airport.

Only the state Chief Secretary and the police chief were there.

The Prime Minister, who is there for an electoral campaign, is visiting the state for the first time since the Telugu Desam Party (TDP) pulled out of the NDA last year.

Ahead of his visit, Andhra Pradesh Chief Minister Chandrababu Naidu announced that he will protest against PM Modi, who is is scheduled to visit Guntur, Tiruppur and Raichur in the state.

Not only TDP, but the Left and the Congress have also planned to join the protest against Modi's visit.

Large posters of "No more Modi"and "Modi never again" are spotted all across the state.

As the convoy progressed towards the rally spot in Guntur, several TDP protesters waved black flags and balloons.

In some places, protesters even burnt tyres and PM's effigies, said reports.

The BJP, meanwhile, asked its Andhra Pradesh party cadre to be present at the rallies in order to make the Prime Minister's visit a success.

The party has also lodged a police complaint against those who put up the hoardings.

Naidu is one of the chief rivals of Modi in the opposition camp.

Asking his party to protest in Gandhian style against Modi's visit to the state, he said: "It is a dark day. PM Modi is coming to witness the injustice that was done to Andhra Pradesh by him. He is weakening the states and constitutional institutions. PMO's intervention in Rafael is disrespect to the nation. We will do peaceful Gandhian protests with yellow and black shirts and balloons."