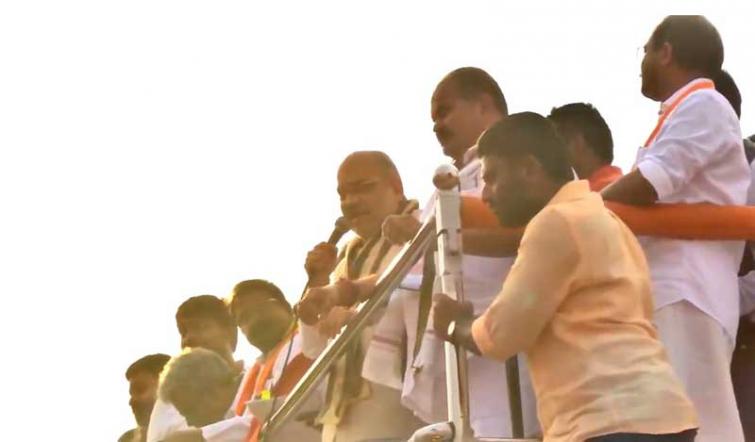 Hyderabad, Feb 4 (IBNS): Bharatiya Janata Party chief Amit Shah on Monday went to Andhra Pradesh and said CM Chandrababu Naidu will not be included in the NDA fold if his party comes to power in the state.

Shah visited Naidu's home turf Andra Pradesh on Monday and said the words while addressing a gathering of booth workers at Vizianagaram.

Shah attacked Naidu and called him as the 'famous U-Turn Chief Minister' of the nation.

Shah said: "Chandrababu Naidu is famous as U-Turn Chief Minister in the country as he has changed his stands several times."

He said: "Chandrababu Naidu joined NTR’s TDP party and enjoyed being in the ruling party. However, he later betrayed NTR and took over the entire party under his control."

"When Atal Bihari Vajpayee became the PM, he chose to become part of the NDA govt to enjoy being in power, and then later left it too. And in 2014, looking at Modi ji's popularity he again joined NDA," he said.

Shah said the southern leader will not be welcomed to the NDA fold next time.

"If BJP comes in power in Andhra Pradesh, doors of NDA will be permanently closed for Chandrababu Naidu," he said.

Naidu and his TDP ended their ties with the NDA after special status for Andhra Pradesh was not granted by the Centre last year.

Naidu has been meeting several opposition leaders, including Congress President Rahul Gandhi and AAP chief Arvind Kejriwal, since then.

Naidu has even extended his support to West Bengal CM Mamata Banerjee who is currently on a dharna in Kolkata to protest against the move taken by the Central Bureau of Investigation (CBI) against city police chief Rajeev Kumar on Sunday.

Naidu tweeted: "This is shocking and we strongly condemn this. We stand by Chief Minister of West Bengal to preserve and protect constitution and spirit of federalism in the country. #SaveDemocracy."

This is shocking and we strongly condemn this. We stand by Chief Minister of West Bengal to preserve and protect constitution and spirit of federalism in the country. #SaveDemocracy