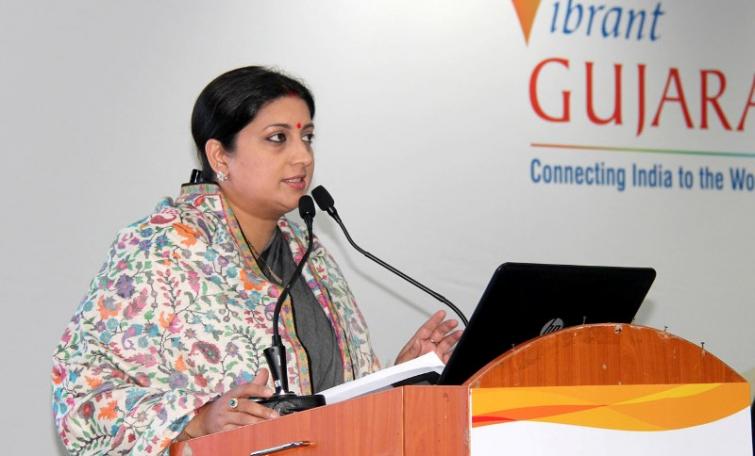 In a Facebook post on the Rahul-Parrikar controversy, the Union textiles minister said: "Unquestionably, he is a congenital liar. The political system is increasingly realizing that it is dangerous to even maintain social contact with him in terms of basic political courtesies."

"'Deep concerns' led him to a courtesy visit the Goa Chief Minister Manohar Parrikar’s residence. He concocted a conversation where he alleged that Manohar Parrikar distanced himself from Rafale," she said.

Replying to the charges, Rahul Gandhi took to Twitter and said Parrikar was under immense pressure from the Prime Minister to prove his loyalty to the BJP after the meeting with him.

The Congress president also attached a letter he had written to the Goa CM.

Asserting that his visit was "strictly personal", Rahul said: "...regardless of my visit, I am an democratic representative elected to serve the Indian people, and as such I reserve the absolute right to attack the corrupt PM on his blatant dishonesty on the RAFALE deal."

"I have not shared any details of my conversation with you when we met in Goa yesterday. In my two speeches since we met, I have only referred to what is in the public domain," he added.

I totally empathise with Parrikar Ji's situation & wish him well. He's under immense pressure from the PM after our meeting in Goa and needs to demonstrate his loyalty by attacking me.

Attached is the letter I've written him. pic.twitter.com/BQ6V6Zid8m

"Normally I would have refrained from this exchange. Unfortunately, your leaked letter has forced me to clarify my position on this unfortunate and unnecessary controversy," he said.

In his letter, Parrikar said: "I feel let down that you have used this visit for your petty political gains. In the 5 minutes you spent with me, neither did you mention anything about Rafale, nor did we discuss anything related to it."

Parrikar, who had earlier served as the Defence Minister, clarified that the procurement of the Rafale was as per the Defence Procurement Procedure.

Parrikar wrote in the letter: “I have said this before and wish to reiterate it again in today’s context too. The fighter aircraft are procured following all stated procedures keeping national security as top priority.”

Referring to Gandhi's visit, he said: “Paying a courtesy visit and then stooping so low as to make a false statement for petty political gain has raised, in my mind, questions about the sincerity and purpose of your visit itself.”

“Here am I fighting against a life-threatening illness. Due to my training and ideological strength. I wish to serve Goa and its people against any/all odds. I thought your visit would give me your good wishes in that cause of serving our people. Little did I know that you had other intentions,” he said.

Goa CM Shri @manoharparrikar on false claims made by Mr. Rahul Gandhi, "I feel let down that you have used this visit for your petty political gains. In the 5 minutes you spent with me, neither did you mention anything about Rafale, nor did we discuss anything related to it.'' pic.twitter.com/77DGqKhoql

Rahul Gandhi was addressing an event in Delhi on Wednesday when he claimed that he met former defence minister and Goa CM Manohar Parrikar who told him that he was not informed about the changes in the deal.

The Congress president alleged that Modi bypassed the Rafale deal and gave the offset contract to his businessman friend Anil Ambani to benefit the latter.

Though the Supreme Court had said that specific process was being followed in signing the deal, the main rival party has made Rafale an election issue to attack the ruling Bharatiya Janata Party (BJP) ahead of the 2019 Lok Sabha polls.