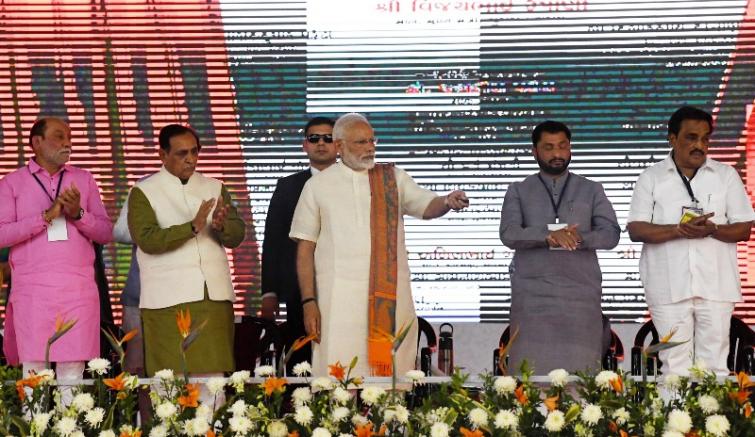 He laid the foundation stone for extension of Terminal Building of Surat Airport which will lead to enhanced connectivity and prosperity in Surat and the Southern Gujarat region.

Addressing a gathering on this occasion, the PM said, “For Ease of Doing Business, the infrastructure of this country must improve and extension of Surat airport is an effort in this direction.”

The Surat Airport Terminal building is being extended with a construction cost of Rs.354 crore with an area of over 25,500 square metres.

It will be an eco-friendly sustainable building, using solar energy and LED lighting.

When the work of the new terminal is over, it will be able to handle 26 lakh passengers in a year in place of 4 lakhs now.

There will be two flights per week initially which will be doubled to four per week, later.

Modi said that under the Udan scheme, more number of airports are being added to give a boost to air connectivity and now people can access it not far from their respective places.

He added, “We want to make air travel accessible to everybody. UDAN has immensely helped to boost air connectivity in India. UDAN has added 40 Airports on the air map of India.  The government is planning to develop more such airports across the country

He asserted, “Because you have given us majority that is why we are able to take tough decisions” and that the NDA government has worked for the middle class unlike the previous governments.

Comparing the performance of his Government vis a vis UPA, Mr. Modi said that “In four years of our rule, we constructed 1.30 crore houses while in UPA rule they built 25 lakh houses.” He also added that “Now we have more than 400 passport offices compared to only 80 in 2014.”

PM also distributed keys to some beneficiaries of Pradhan Mantri Awas Yojana in Surat. He said the Government is working on a mission mode with focussed approach for ease of living of the poor and middle class of the country, “More than 13 lakh houses have been built for the poor living in cities in the past four years by the government and construction of 37 lakh homes is underway.”

Recalling the role of Surat in freedom movement, Mr. Modi expressed hope that the city will emerge as one of the fastest developing cities across the globe in a decade with a surge in the investments in the city.

Later in the day, PM inaugurated a state of the art super speciality, Rasilaben Sevantilal Shah Venus Hospital in Surat.

He inspected facilities in the hospital. Addressing a public gathering, he underlined how Ayushman Bharat has played a key role in providing affordable health care services to the people.

He said that more number of generic medicines are now available for the people which will not only reduce the cost of health care but also save many precious lives.

Later this evening, PM will address New India Youth Conclave at Surat Indoor Stadium after his return from Dandi where he unveiled the National Salt Satyagraha Memorial.

The memorial has statues of Mahatma Gandhi and 80 Satyagrahis who had marched with him during the historic Dandi Salt March to make salt from sea water against the British rule 24 narrative murals here depict various events and stories from the historic 1930 Salt March. It has been a landmark event in the history of India’s freedom struggle.