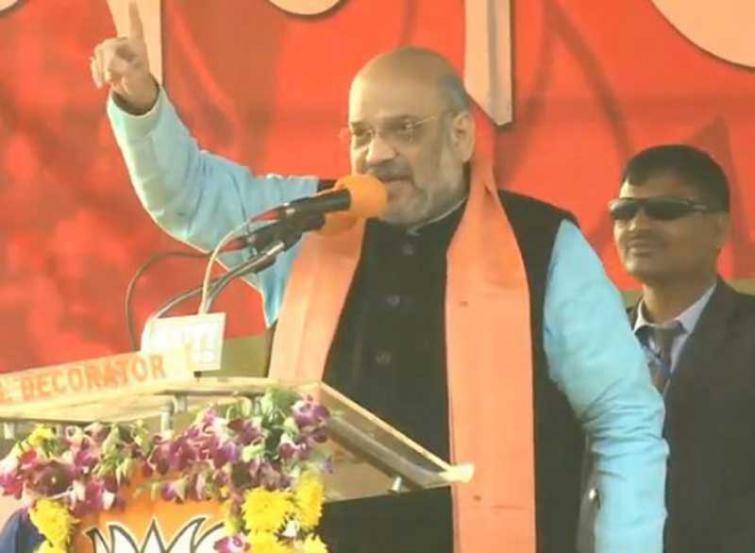 SP-BSP alliance coalition of corruption, country can go ahead only with 56 inch : Amit Shah

Lucknow, Jan 30 (IBNS) : Slamming the SP-BSP alliance as a "coalition of corruption," Bharatiya Janata Party chief Amit Shah on Wednesday said the rules of the respective party have  always been synonymous to crime and corruption.

After kick starting his party's poll preparation in Uttar Pradesh through booth-level meetings, Shah told a rally that  Samajwadi Party and Bahujan Samaj Party have only done caste politic. " Our workers must bring down SP-BSP alliance. This is a coalition of corruption," he said.

"Now another alliance is in place. This one is of crime, corruption and caste. The forces which left Uttar Pradesh regressive and non performing due their caste based politics have come together.Two have joined hands and two others will also join. Let them come together, the BJP is well prepared at the booth leve," Shah said.

Speaking on the attempt to build up an opposition grand alliance to take on the BJP in the coming Lok Sabha polls, Shah said the nation will be on holiday if there is a coalition Government." If gathbandhan comes to power then Behenji will be PM on Monday, Akhilesh ji on Tuesday, Mamata didi on Wednesday, Sharad Pawar ji on Thursday, Deve Gowda ji on Friday, Stalin on Saturday, and the whole country will go on a holiday on Sunday," he said.

Asserting that the BJP is ending caste politics, Shah said only a man like Prime Minister Narendra Modi can run this country without any compromise. "This country can go ahead with 56 inc," he added.

"The BJP Government has worked for all not for any one caste. The BJP is ending this caste system because caste based politics doesn’t give benefits to those at lowest of the pyramid," Shah said.

Claiming that temple is not a political issue for BJP, Shah said the party is committed for the Ram shrine in Ayodhya.

He asked the BJP workers to take pledge to capture 74 seats in place of current 73 seats."Not one less."