Kolkata, Jan 12 (IBNS): A rift between two camps of Indian National Congress (INC)'s West Bengal unit came to fore on Friday over the protest against the screening of "The Accidental Prime Minister" in the state which turned ugly when a group stormed inside a theatre in Kolkata and tore up the screen.

After the 1 hour 50 minutes long political drama was released in a large number of theatres throughout India on Friday, Congress workers staged demonstration in front of several movie theatres in different states, including West Bengal, and the protests led to suspending the screening of the film at those cinema halls.

Two multiplexes in Kolkata and another cinema hall in northern region's Siliguri on Friday witnessed  agitation and vandalism during the screening of The Accidental Prime Minister. 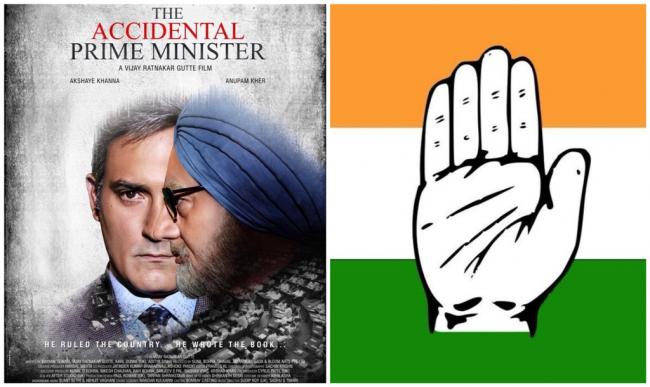 Besides burning an effigy of Prime Minister Narendra Modi, Congress protesters tried to enter the theatre.

A heavy police force rushed to the scene to bring the situation under control and citing security concern of the spectators present inside the hall, the theatre's authority had to stop the screening immediately, just 10 minutes after it started.

After reaching the screening area, agitators reportedly tore apart the screen and asked people to leave the theatre immediately.

Mall's security guards rushed to the scene and they took all demonstrators out of the cinema hall.

Due to the incident, spectators had to watch the entire movie on a torn screen.

Meanwhile, a large number of Congress workers stormed into a single-screen theatre at Pradhan Nagar area in Siliguri city of north Bengal and besides tearing of The Accidental Prime Minister's posters, they tried to vandalize the hall. 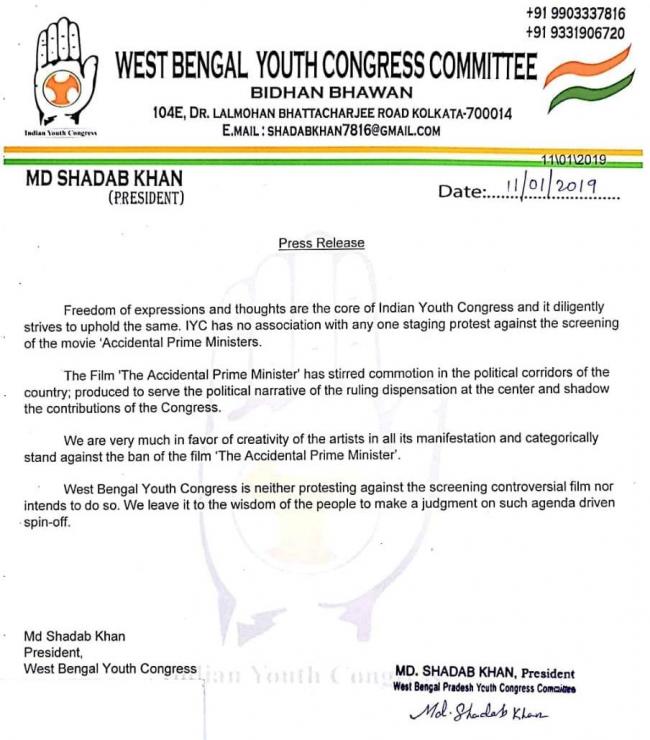 The agitators allegedly threatened the hall's authority not to run the controversial movie there.

When one after another such incidents were being reported from different parts of Kolkata as well as West Bengal, WBPCC and WBYCC leaderships claimed that they had not sanctioned any such protest or agitation.

WBPCC president Somen Mitra said, "Congress or its youth wing is neither protesting against the screening of the controversial movie nor intends to do so."

Somen Mitra's son, WBYCC's vice president Rohan Mitra told IBNS, "INC leadership did not direct us to stage any demonstration at cinema halls during the screening of the movie and our party is neither holding agitation at movie theatres nor forcing authorities to stop screening."

"We do believe in freedom of speech and expressions and we leave it to the wisdom of the people to make a judgement on such agenda driven spin-off," Rohan Mitra added.

In late evening, WBYCC president Md. Shadab Khan issued a statement claiming Indian Youth Congress (IYC) had no association with anyone staging protest at cinema halls during the screening of The Accidental Prime Minister.

Meanwhile the Mamata Banerjee government in West Bengal said it does not have any problem with the screening of The Accidental Prime Minister.

West Bengal minister of state for Information and Cultural Affairs, Indranil Sen, said, "There is no order from the state government to suspend the screening of The Accidental Prime Minister or any other movie in the cinema halls of West Bengal."

Since the trailer of controversial movie The Accidental Prime Minister, which reportedly explores Manmohan Singh's tenure as the Indian Prime Minister and reportedly project the Gandhi family in poor light, was out and its release date was announced, Congress leaders have been claiming that the film was just an "incorrect presentation of facts".

Pleas to ban the movie have been filed before several courts while multiple police complaints have been registered against actor Anupam Kher, who played the role of Manmohan Singh in the film.