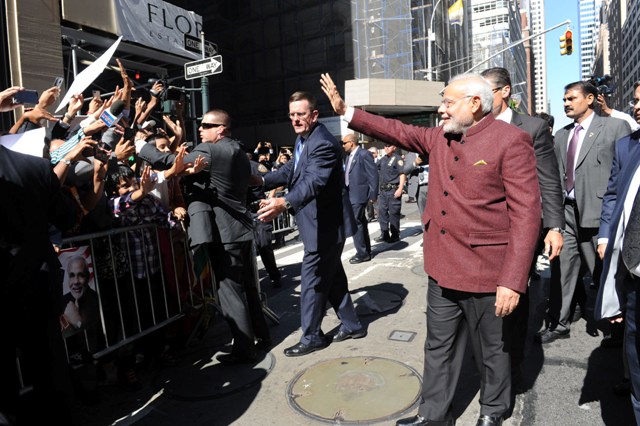 PM Modi flew into New York's JFK airport on a special Air India Boeing plane on the first leg of his maiden visit to the US as Prime Minister. He took an overnight halt at Frankfurt.

PM Modi came out of his huge convoy and greeted a large number of Indians who had gathered outside his hotel to welcome him and were chanting his name.

Addressing the nation prior to his departure, Prime Minister Narendra Modi said that he will pitch for reforms in the United Nations when he addresses there.

Terming the US as India’s natural global partner, PM said: “I am visiting the United States from 26 to 30 September 2014. I will attend the United Nations General Assembly in New York and, thereafter, visit Washington DC on 29-30 September 2014 for a bilateral summit with U.S. President Barack Obama.”

About his address in UNGA, Modi said, “Since its participation as a founding member of the United Nations in 1945, India has shown unwavering commitment to multilateral processes to advance peace and security and promote broad-based inclusive economic development in the world. India`s contribution to UN peacekeeping operations over decades is a strong testimony of our efforts to contribute to the achievement of the objectives of the UN charter.”

Earlier, PM Modi had said that he would discuss with Obama how Indo-US ties can be taken to a “new level” in the interest of both the nations as well as of the world. He also dubbed the US as India’s “vital partner” for its national development.

American President Barrack Obama will host a rare private dinner for Modi at the White House on September 29 where the Indian PM is expected to have only tea and lemonade as his US visit coincides with the Navratri fast which he religiously observes during this time the year, sources said.

The Indian Ambassador to USA and other officials welcome the Prime Minister at the airport.