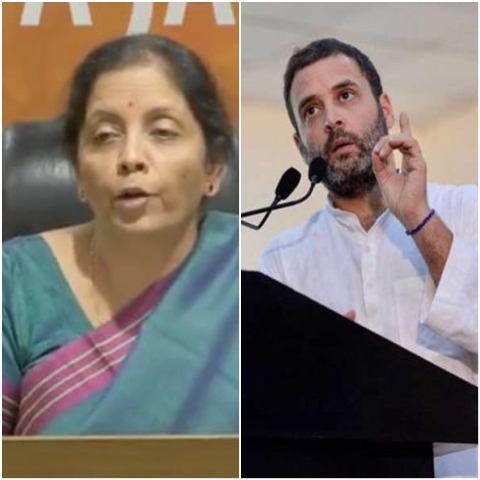 New Delhi, Jan 7 (IBNS): A day after Defence Minister Nirmala Sitharama and Congress president Rahul Gandhi exchanged barbs on Twitter over the issue of procurement orders worth Rs. 1 lakh crore given to the Hindustan Aeronautics Limited or HAL, the Parliament might expect to witness another session of a showdown on Monday.

Rahul Gandhi on Sunday quoted a media report and challenged the Minister to place all documents related to the government orders in the Parliament or resign from her position.

He tweeted: " When you tell one lie, you need to keep spinning out more lies, to cover up the first one. In her eagerness to defend the PM's Rafale lie, the RM lied to Parliament. Tomorrow, RM must place before Parliament documents showing 1 Lakh crore of Govt orders to HAL.Or resign."

Gandhi was attempting to corner the minister of over a report published in Indian newspaper The Times of India which said  India’s leading defence PSU Hindustan Aeronautics Limited (HAL), grappling with stressed finances, is keenly awaiting formalisation of orders adding up to Rs 1 lakh crore mentioned by defence minister Nirmala Sitharaman during the discussion on the Rafale fighter deal in the Lok Sabha on Friday.

The paper said though the process of ordering has been started but no actual order was placed so far.

Def Min claimed that procurement orders worth â‚¹1 Lakh Cr provided to HAL! HAL says Not a SINGLE PAISA has come, as Not a SINGLE ORDER has been signed! For the first time,HAL forced to take a loan of â‚¹1000 Cr to pay salaries!."

The Minister asked Gandhi to read the entire news report before making any comment on the issue.

"Please read the complete report in â¦@timesofindiaâ© to which you ( â¦@RahulGandhiâ© )are referring: “However, as the LS record shows, Sitharaman did not claim the orders were signed, saying they were in the works.” | India News - Times of India," she tweeted.

“Our neighbourhood is very volatile. It is, therefore, important that we do anything to keep peace. Timely procurement of getting arms and ammunitions is a must. China added 4,800 aircraft. It’s the fourth generation aircraft being added by China. Pakistan increased its aircraft numbers by more than double in the last 10 years. In 2002, India had 42 squadrons, and came further down,” she said.

The Defence Minister's reply came after the Congress accused the Centre of lying before the Supreme Court by citing a "non-existent" CAG report on Rafale deal and demanded that Prime Minister Narendra Modi reply to the debate in Lok Sabha on the issue.

Kharge had accused Modi of giving offset contract to his "favourite man" and reiterated the demand for a probe by a Joint Parliamentary Committee.