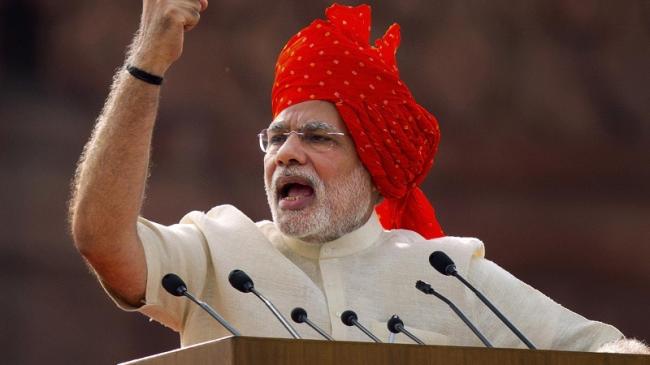 Interacting with BJP workers in Andhra Pradesh through video conferencing, Modi said: "NTR was the true icon of Telugu pride."

"It was NTR who led the Congress-mukt Bharat movement with the anti-Congress national front. Today, his own son-in-law has bent his head in front of the Congress to save his power," he said.

Modi went on to add that those in power in Andhra now were desperate to hold on to power and for that, the had betrayed NTR.

"How is Telegu interests served by one family's hold on power in Andhra Pradesh?" he questioned.

On Friday, the Andhra Pradesh chief minister was caught on camera threatening BJP workers when they attempted to block his convoy on his way to attend 'Janmabhoomi maa vooru' event in Kakinada area of the state.

Naidu was in the Godavari district to attend the event when some BJP workers were seen raising slogans against him.

According to reports, Naidu stepped out from his vehicle and was quoted as saying to the workers who were attempting to block his convoy: "You will get beaten up. Don't invite unnecessary trouble. You will be finished. Do you support the injustice meted out to AP?."

"If you go on the streets, people will teach you a lesson," he said.

Naidu has criticised PM Narendra Modi and his government in recent times for not granting special status to Andhra Pradesh.

Naidu's TDP and the BJP had worked the Lok Sabha polls in 2014, which witnessed a landmark victory of Narendra Modi, together.

Last year, Naidu's party moved out from the Centre by breaking the alliance on the ground that the government did not fulfil their demand to grant special status to Andhra Pradesh.

The move was seen as one of his attempts to construct a united Opposition to take on the BJP in the 2019 General Elections.