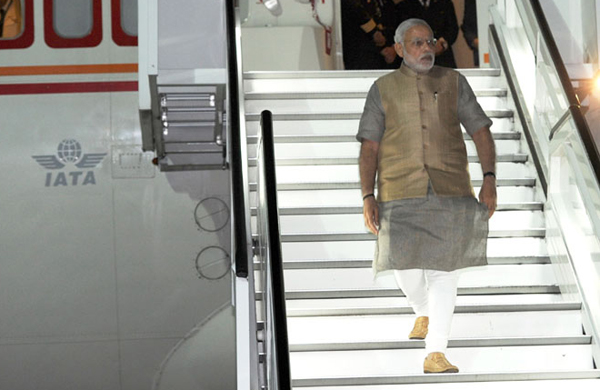 Before landing in US, Modi praises Obama

On Thursday, in an article in the op-ed sction of widely-acclaimed Wall Street Journal (WSJ), Modi said both countries have a fundamental stake in each other’s success.

He said, “United States is our natural global partner. India and the U.S. embody the enduring and universal relevance of their shared values. The thriving Indian-American community in the U.S. is a metaphor for the potential of our partnership, and for the possibilities of an environment that nurtures enterprise and rewards hard work. Our strengths in information technology are especially important for leadership in the digital age. The partnership between our businesses takes place in the comfort and certainty of similar political systems and shared commitment to rule of law. In education, innovation, and science and technology, the U.S continues to inspire India.”

Modi’s evaluation for US has changed a lot since 2005 when he was denied visa to visit the country by the then US Government, who accused him of abetting riots in his home state, Gujarat in 2002.

Modi was the Chief Minister then.

But US caught in the wrong foot when Supreme Court gave clean-chit to Modi in the riots case.

Sensing that Modi will become the next PM of India, Washington renewed their “diplomacy” with Modi.

Evidently, the ban was uplifted after Modi clean-swept the elections earlier this year, thus resulting in the change of guard in the Centre.

Immediately after Modi donned the role of Prime Minister, US invited him to that country.

There was quite speculation as how Indo-US relationship will bosom under Modi, who is thought to remember the “insult” meted out to him by US Government.

But Modi on Thursday made it clear that he is going to leave the “old and dark” memories behind and start the relation on a new note.

With focus on boosting trade and resetting ties with the USA, PM Modi has struck a new chord by saying “India and the U.S. have a fundamental stake in each other’s success—for the sake of our values and our many shared interests. That is also the imperative of our partnership. And it will be of great value in advancing peace, security and stability in the Asia and Pacific regions; in the unfinished and urgent task of combating terrorism and extremism; and in securing our seas, cyber space and outer space, all of which now have a profound influence on our daily lives.”

Terming India as the world’s largest democracy and USA as the world's largest economy, Modi said, “The complementary strengths of India and the U.S. can be used for inclusive and broad-based global development to transform lives across the world. Because our countries’ values and interests are aligned, though our circumstances are different, we are in a unique position to become a bridge to a more integrated and cooperative world. With sensitivity to each other’s point of view and the confidence of our friendship, we can contribute to more concerted international efforts to meet the pressing global challenges of our times. This is a moment of flux in the global order. I am confident in the destiny of our two nations, because democracy is the greatest source of renewal and, with the right conditions, offers the best opportunity for the human spirit to flourish.”

Earlier, before embarking on the tour, Modi in New Delhi heaped praise for Barack Obama by stating that US President’s life is an inspiration to people.

In a statement ahead of his departure, Modi said he was "confident that the visit will mark the start of a new chapter in our strategic partnership".

He said he looked forward to his first meeting with President Barack Obama.

"His life's journey is a remarkable testimony to the rights and opportunities that democracies provide, and an inspiration for people around the world," the Prime Minister said.