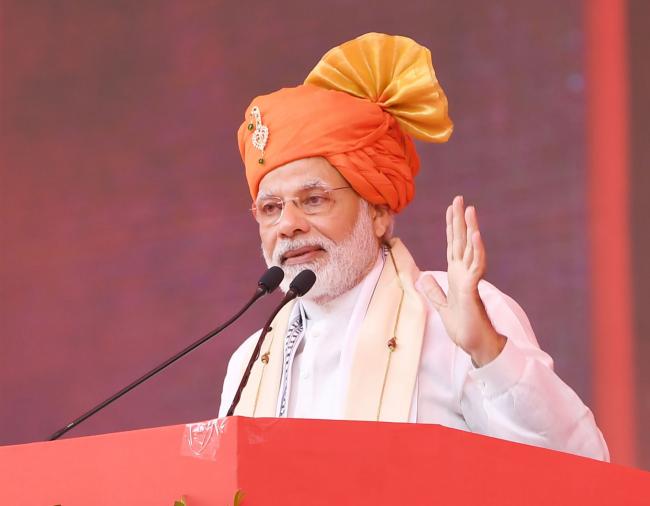 Dharamsala, Dec 27 (IBNS) :Alleging that the Congress has "backstabbed" jawans of the Indian Army, Prime Minister Narendra Modi on Thursday said the previous government had done nothing in the name of One Rank One Pension, which was finally implemented during his tenure.

"For forty years, our ex-servicemen asked for 'One Rank, One Pension'. The previous government allocated just Rs. 500 crore for it. But when we came to power, we implemented OROP and ensured welfare of our ex-servicemen," he said while addressing a rally at Dharamshala.

PM Modi also claimed that it was his BJP government that implemented the "One Rank One Pension" in "real" sense while the previous Congress government "misled" nation.

He also alleged that Congress was misleading farmers in the name of loan waive.

The Prime Minister said the present dispensation is giving stress on "next generation infrastructure" and Himachal Pradesh is getting much more for its development than it used to get earlier.

He announced that projects worth Rs. 26,000 crore were underway in Himachal Pradesh.

"Now HP gets Rs 72,000 crore as a grant compared to Rs 21,000 thousand crore which earlier government at the Centre used to give," he said.
"In just one year, the state government has done splendid work. I thank CM Jai Ram Thakur for it."

In a rebuff to Rahul Gandhi's "chor chowkidar" barb at him, Modi said "now the corrupt are afraid of chowkidar."

"We have started direct money transfer for the beneficiaries. This put a check on corruption," Modi said.

He said within four years, tourism industry has grown many folds in India.

He said he is sad to hear the news of accident in which people coming to attend the rally were injured. "I'm saddened to hear that some people coming for my rally met with an accident. We will provide all help possible."