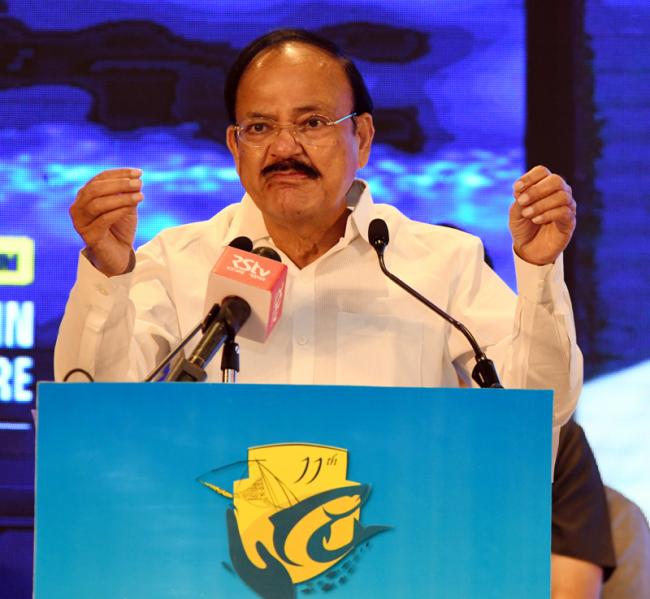 Good governance and reforms must empower the last man in queue: Vice President

New Delhi, Dec 26 (IBNS): Vice President M. Venkaiah Naidu has said that ultimate aim of good governance and reforms was to empower the last man in the queue and providing a say for such persons in the process of development should be the ultimate aim of governance.

He was addressing the gathering at a function to present the Champions of Change Awards 2018, instituted by medial platforms Power Corridors and Panchayati Times (Media platforms), here on Wednesday.

The Vice President said that ‘Antyodaya’ should go from being a long cherished dream, a work in progress, to being an everyday reality as he advocated the use of new technologies, promoting innovation and skill development at a rapid pace to realize ‘Antyodaya’

Naidu said that for any development strategy to be effective, it should help achieve broad-based economic growth to ensure balanced development across all regions and states and across sectors.

He said that Champions of Change Awards was an endeavour to tell the world about positive developments in India.

"It is crucial that the stories of people who toil for the betterment of their brethren be told again and again," he added.

"Such stories would serve as a call to action and inspire people to take up their own projects of positive change," he said.

The Vice President said that reform agenda of the government and series of steps take to improve governance mechanism of the country made Indian economy is robust and resilient.

He said India that witnessed a growth rate of 7.1% during the last quarter of 2018 must build on the growth story further by taking advantage of the youth power by realising the demographic dividend.

Naidu said that one should not overlook the fact that progress is possible only when we are able to utilize the potential of people to participate fully in the burgeoning economy.

"There may be differences of opinion about the ways and means to address the issues concerned but everybody agrees that there has to be a special focus on Aspirational Districts," he added.

The Vice President stressed the need to nurture sustainable agricultural practices and place great emphasis on the efficiency to meet the food and nutrition needs of India.

He also highlighted the need to modernize and consolidate Indian agriculture and said that ‘Maximum output through optimal utilization of resources’ should be the Mantra.

Naidu said that India has a vibrant media that is also a crucial stake holder in the development process.

"It provides news, puts it in perspective, analyzes events, exposes wrongdoings, exposes corruption, and generally highlights what is wrong, he said. Media also highlights the good news, aids and abets the process of development by telling inspiring stories and by spreading the message of change as well," he said.

The Vice President said that Champions of Change awards recognize DMs, SPs, MPs, NGOs and individuals who have ushered in refreshing changes in their districts through their commitment, dedication, creative interventions and innovations from around 115 districts across India.

"The ‘Transformation of Aspirational Districts’ program, the brain child of the premier think tank of India, the NITI Aayog, aims to quickly and effectively bring about transformational changes in the chosen 115 districts of India," he added.