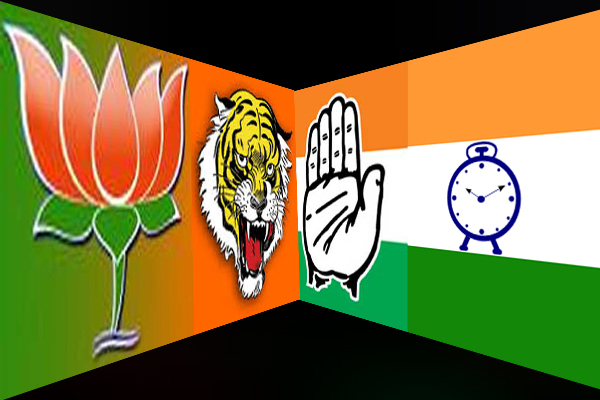 After 25 years staying together, the grand alliance of BJP & Shiv Sena “Mahayuti” came to an end on Thursday night.

The coalition which started during the Atal Bihari Vajpayee-Balasaheb Thackeray era came to an abrupt end owing to the seat-sharing differences between two parties which has clouded for the past weeks.

Shiv Sena had of course put the onus of separation on BJP. In party mouthpiece Saamna, Sena lashed out at BJP by saying, "Our other alliance parties wanted the Sena-BJP combine to continue. More than that, it was what the 11 crore people of Maharashtra wanted. Those who trampled these sentiments are enemies of Maharashtra."

If BJP-Shiv sena split formed the first half of “hot-news” on Thursday, the latter half comprised the end of ruling Congress-NCP coalition.

Like BJP-Shiv Sena, Congress and NCP bid adieu to each other after 15 years of alliance.

Reason for split being more or less the same as BJP-Shiv Sena case, where NCP demanded more seats from coalition partner Congress, which the latter denied.

The last nail in the coffin was places when Congress released the first list of its contesting candidates, which the NCP said has been done without consulting it.

Now that the two “Maha-divorce”, as the political fraternity termed it, has taken place, BJP, Shiv Sena, Congress and NCP have started with new life beyond their coalition.

With the deadline for filing nomination papers nearing, all the political parties are now on a war-footing to declare candidates as soon as possible, media reported.

A “freed” BJP is contemplating to contest in as many as seats as possible.

It has been learnt that, BJP is reportedly ready to announce its first list of 190 candidates for the Maharashtra elections to be held on October 15.

Sources said the party will contest about 250 of the 288 seats and leave the rest for its smaller allies, which comprised the rest of “Mahayuti” alliance.

On the other hand, The Congress has already announced a list of 118 candidates.

It has been learnt that Shiv Sena and Sharad Pawar-led NCP are going to release their respective list soon.

Saturday, is the last day to file nominations and all parties.

In the mean while, senior Congress leader and Maharashtra Chief Minister Prithviraj Chavan on Friday questioned the timing of the two break-ups, insinuating that the NCP is in talks with the BJP and is looking at post-election re-alignments, both in the state and at the Centre, where the BJP is in power.

Both the BJP and the NCP have stoutly denied this.

"We won't ally with NCP at any cost," Maharashtra BJP Chief Devendra Fadnavis is quoted by media as saying.

For the first time in decades, the BJP, Shiv Sena, Congress and Nationalist Congress Party will contest separately, making it a four-cornered contest in Maharashtra with Raj Thackeray's Maharashtra Navnirman Sena or MNS providing the fifth angle.

According to political experts, now that all the parties are going to polls on their own, the upcoming elections will see a trend where the ballot fight will see the strength and weaknesses of the individual parties.

Although, some small alliance are going to take place like Congress has said it will partner with the Samajwadi Party.

The NCP could ally with the Left parties, sources have said. But that is not going to have a “Maha” impact, said the experts.