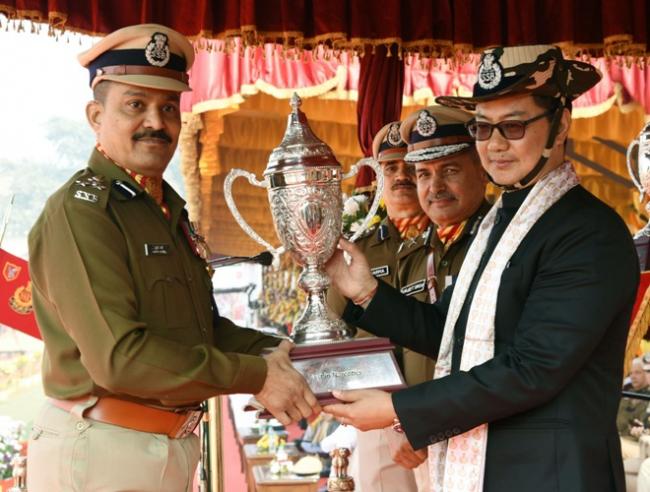 The Minister of State for Home Affairs Kiren Rijiju took the salute of the parade and inspected the impressive parade with Director General, SSB Shri S S Deswal.

Later, there was a display of SSB troops, Dog squad, Dare Devil team and other arts by SSB personnel.

Kiren Rijiju conveyed his wishes to the SSB for the Anniversary Day celebrations and congratulated the award winners for their dedication.

He applauded the SSB for serving the Nation with the motto of “Seva, Suraksha and Bandutva”, wherever it has been deployed since its inception in the year 1963.

He said that SSB has become the second largest Border Guarding Force of the country.

He appreciated SSB for operationalization of its all 73 Battalions in a given span of time. He also said that Government has approved creation of 650 posts for the intelligence set-up of Sashastra Seema Bal.

The Minister commended the achievements of SSB against perpetrators of various crimes, drug peddlers, illegal arms, wildlife and prohibited items on the border.

He also appreciated the efforts of SSB against the menace & evils of human trafficking.

He expressed his happiness that SSB has signed an MoU with National Skill Development Corporation to impart training to the victims rescued from human traffickers and making them self-reliant.

Rijiju said that SSB is the first Border Guarding Force of the Nation to induct women in the year 2007 for border guarding duties.

He said that SSB has been performing its duties to guard India’s borders with friendly neighbouring countries, which is a challenging task in itself.

He added that SSB is also performing its duties in other parts of country such as J&K, LWE affected areas, and natural calamities hit areas, among others.

"SSB has its 2 Bns deployed in NDRF," he added.

He also applauded SSB for its Civic Action programme, contribution to Beti Bachao, Beti Padhao programme and Swachh Bharat Abhiyaan etc. He also congratulated the sportspersons of SSB who have won medals at various national and international events.