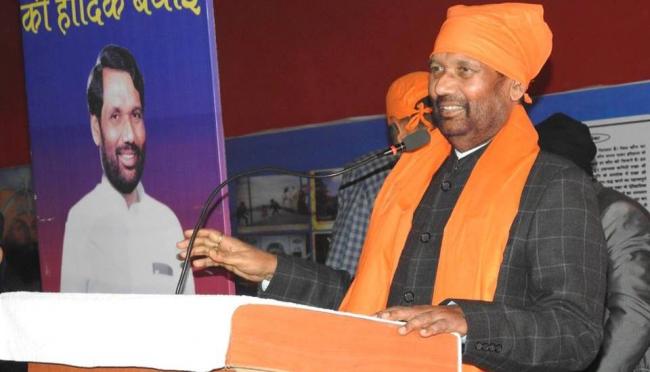 Chirag Paswan, the son of Ram Vilas, had issued a warning to the BJP on Twitter saying the two parties needed to seal the deal on seat-sharing at the earliest.

Union finance minister Arun Jaitley attended Friday's meeting to sort out the issues. The announcement of the pact is likely to be made on Saturday.

Hindustan Times quoting sources said Paswan’s LJP was open to contest five seats in Bihar and one in neighbouring Uttar Pradesh or or Jharkhand.

The BJP has however agreed to offer a seventh seat, a Rajya Sabha seat for the senior Paswan, said reports.

Ram Vilas Paswan, 72, is seeking a Rajya Sabha seat as he intends not to contest in the 2019 general elections. He is currently a nine-term Lok Sabha member and holds the Union Ministry for Food Distribution.

In the 2014 elections, Paswan’s party had been allocated seven seats by the NDA.

However, BJP President Amit Shah and the third partner in the NDA in Bihar, Chief Minister Nitish Kumar’s, had earlier agreed to share the state seats in an equal number.

The two parties were reportedly eyeing to contest from 17 seats each, leaving six to be shared between Paswan’s party and Upendra Kushwaha of the Rashtriya Lok Samata Party, who has since then joined the rival camp- that is the Bihar grand alliance, which is led by the Congress and Rashtriya Janata Dal (RJD).

In the tweet on Thursday, Chirag Paswan had said: "Had several meeting with BJP leaders over seat-sharing of the alliance but talks didn't progress much. If no deal is sealed on time, there may be some losses."

In another tweet, Chirag had said: "After the exit of TDP and RLSP, the NDA is going through a tough time. So the BJP must drive away the worries of the remaining allies on time by taking necessary steps."

However, Ram Vilas Paswan had denied any rift between the two parties.