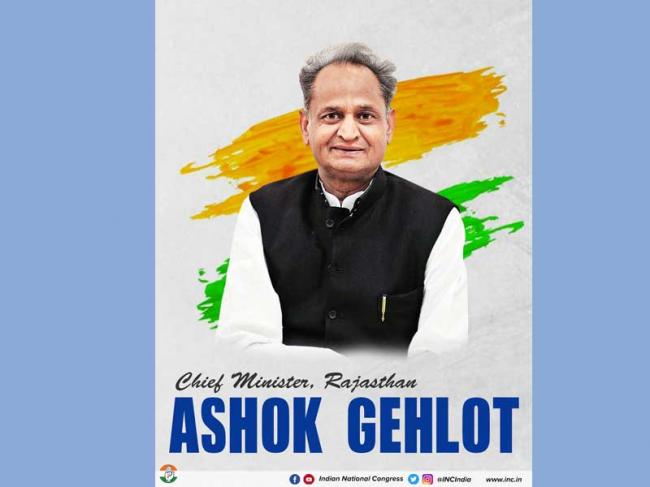 Jaipur, Dec 14 (IBNS): Ending all dilemma and deliberations, the Congress on Friday named Ashok Gehlot as the Chief Minister of Rajasthan.

The decision ended all dilemma regarding the choice of Chief Minister for the party in the state.

The frontrunners for the post were Sachin Pilot and Ashok Gehlot.

Meanwhile, the party also named Sachin Pilot as the Deputy CM of the state where the Congress scripted a major victory and removed the Bharatiya Janata Party and ex-CM Vasundhara Raje from power.

Congratulating, Gehlot, the party tweeted: "@ashokgehlot51 a stalwart of the Congress party has been elected CM of Rajasthan. We wish him the best as he takes on this new appointment with vigour, sincerity & a commitment to our democratic values. "

Our best wishes to Shri @SachinPilot, the new Deputy CM of Rajasthan. A young & dedicated leader, he is sure to bring development, peace & happiness to the people of Rajasthan. pic.twitter.com/0UlcCDESFl

Similar to what he did with Madhya Pradesh leaders a day ago, Rahul on Friday took to Twitter to share a picture with veteran party leader Ashok Gehlot and Rajasthan Congress chief Sachin Pilot.

The Congress, which won 99 seats in Rajasthan, is set to form the next state government with the support of smaller parties. The majority mark is 101.

On Thursday, Rahul had tweeted a picture with Madhya Pradesh leaders Kamal Nath and Jyotiraditya Scindia. However, Rahul picked veteran Nath as the new Chief Minister of Madhya Pradesh, where also the Congress is going to form the government.