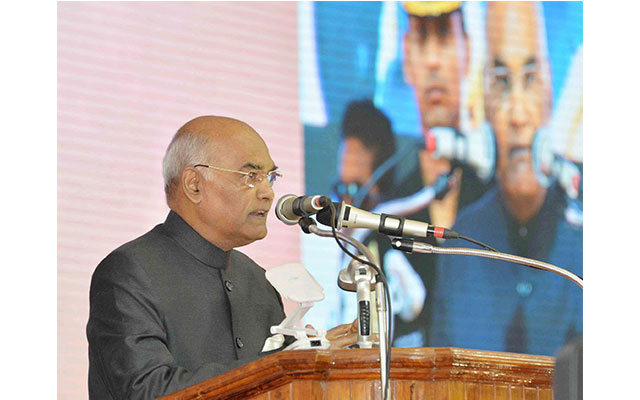 He was accorded a ceremonial welcome and formally received by President U. Win Myint of Myanmar.

Subsequently, the President led delegation-level talks between the two sides. The President said that India attaches special priority to its relations with Myanmar. Myanmar is a key partner for India’s “Act East” and “Neighbourhood First” policies. President Kovind also described Myanmar as a “natural bridge” from India to Southeast Asia and ASEAN.

The President said India takes pride in its development cooperation partnership with Myanmar and is committed to completing all connectivity projects. The port and inland waterway components of the Kaladan project have been built. India seeks Myanmar’s support to expedite completion of the remaining projects. It is privileged to contribute to capacity development in Myanmar.

The President also met Daw Aung San Suu Kyi, the State Counsellor of Myanmar, at the Presidential Palace. The two leaders discussed various bilateral and multilateral issues. The President said that India deeply appreciates the reforms underway in Myanmar. We understand that this is a particularly challenging time for Myanmar. India is in full support of the objectives of the National Peace Process.

The President said that residents of India’s Northeast region have particularly welcomed and are beginning to reap the benefits of the Land-border Crossing Agreement concluded recently. They look forward to the early conclusion of the Motor Vehicles Agreement. Connectivity initiatives are bringing progress and prosperity to people on both sides of the border.

On the occasion of President Kovind’s visit, India and Myanmar signed two agreements :

An agreement between the National Judicial Academy of India and the Office of the Union Chief Justice of Myanmar for training and capacity building of judges and judicial officers in Myanmar.

India is building 250 houses in Myanmar’s Rakhine province as part of a developmental project. The first batch of 50 houses was formally handed over to the Myanmar authorities today.

Coinciding with President Kovind’s visit, and to further people-to-people relations, Myanmar has also announced a visa-on-arrival facility for Indian tourists entering the country through the international airports of Nay Pyi Taw, Yangon and Mandalay.

Later this evening, President Kovind will attend a banquet hosted in his honour by President U. Win Myint. His state visit will continue tomorrow (December 12, 2018).