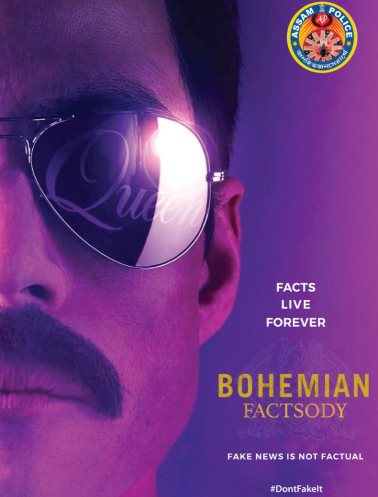 Assam Police had shared an altered version of the iconic Freddie Mercury song from its official Twitter handle sharing: “Fact check before you forward. There’s no escape from reality.”

This move has come after the Karbi Anglong lynching incident, where two youths hailing from Guwahati were lynched by a group of villager at Dolamara area in the hill district of Assam in June this year and the entire incident was triggered by a fake news that claimed these two youths were child lifters.

Following the incident, Assam Police are trying to aware the people about harmful effects of any fake news.

Not only the Karbi Anglong lynching incident, few other incidents happened in the state which were triggered by fake news.

To make people aware about harmful effects of the fake news, Assam Police used the lyrics of Queen’s Bohemian Rhapsody, one of the greatest songs of all times, which was released in the year 1975.

In its tweet, Assam Police used ‘Bohemian Factsody’ word instead of the word ‘rhapsody’ and send a message that fake news is not factual.

Open your eyes,
Look up to the skies and see,
Real life is not a fantasy.

Fact check before you forward,
There's no escape from reality.

Assam DGP Kuladhar Saikia said that, it is an awareness message and Assam Police are always trying to aware the people about the harmful effects of any fake news.

“We appeal the people that don’t believe any fake news,” the Assam DGP urged to people.