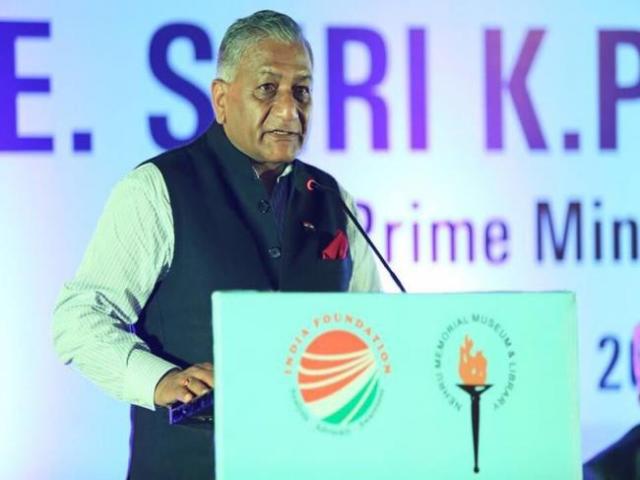 Geneva, Nov 28 (IBNS): The Minister of State for External Affairs, General (Dr.) V K Singh (Retd.) led the Indian delegation to the Ministerial Conference on Afghanistan held in Geneva on 28 November 2018. The Geneva Ministerial Conference was organised to evaluate and strategise on developmental policy achievements during the transformation decade (2015-24) for Afghanistan.

In his address at the Ministerial Conference on 28 November, MoS spoke of India's age-old historical, cultural, civilizational and economic ties with Afghanistan. He reiterated India's firm commitment to the rebuilding and reconstruction of Afghanistan. He voiced India's support for an inclusive political settlement in Afghanistan. He also enunciated India's perspective on the development cooperation assistance to Afghanistan keeping the priorities of the people of Afghanistan at its centre.

Earlier, on 27 November, MoS had participated in the high-level closed door dinner on Peace in Afghanistan jointly organised by the Government of Afghanistan and the UN. He expressed India’s support in building a united, stable, secure, inclusive, democratic and prosperous Afghanistan and reiterated that peace and reconciliation efforts in Afghanistan have to be Afghan-led, Afghan-owned and Afghan-controlled. MoS stated that for enduring peace and stability, terrorist safe havens and sanctuaries need to be eliminated and there is an imperative need for any political settlement to be free of external influence.

A restricted breakfast meeting on Peace in Afghanistan was also jointly organised by the Government of Afghanistan and UN on 28th November. In the breakfast meeting, MoS conveyed the support of India to the efforts of the Government of Afghanistan in the peace and reconciliation process and the need for firm action by the international community against those who breed, support, sustain and sponsor terror and violence. MoS reiterated India’s development assistance commitment of over US$ 3 billion to Afghanistan in consonance with Afghanistan’s priorities under its National Peace and Development Framework.

On the margins of the Geneva Ministerial Conference, MoS separately called on the President of Afghanistan and the Chief Executive of Afghanistan. MoS held bilateral meetings with the Foreign Ministers of Norway and Hungary. India also participated in the Side Meeting on ‘Role of Regional Partners of Afghanistan’ on 27 November.

At the conclusion of the Ministerial Conference, the Geneva Communique entitled ‘Securing Afghanistan’s Future: Peace, Self-Reliance and Connectivity’ along with the Geneva Mutual Accountibility Framework document on Deliverables was adopted.