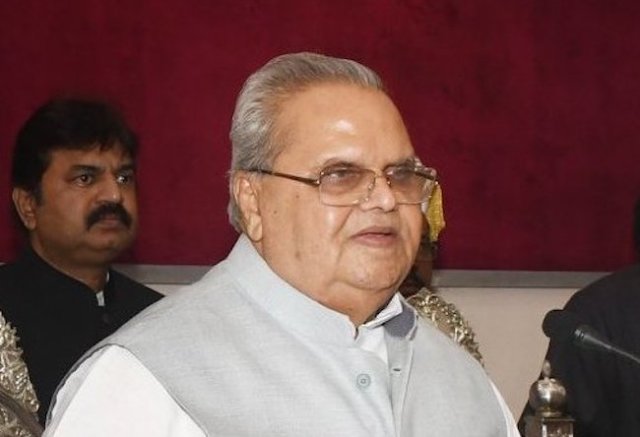 New Delhi, Nov 28 (IBNS): Jammu and Kashmir Governor Satya Pal Malik has said he is under "the threat of transfer", media reports said.

At a programme on Tuesday to pay tribute to Congress leader and former minister Girdhari Lal Dogra on his 31st death anniversary in the national capital, Malik said: “Girdhari Lal ji dedicated his life to the cause of the poor. As long as I am here, I will definitely come to pay my tributes to him… It (transfer) is not in one’s hands. I will not lose my job but the threat of transfer remains.”

Former Jammu and Kashmir chief ministers Mehbooba Mufti and Omar Abdullah on Tuesday had words of praise for the state's governor Satya Pal Malik after he said he would have had to install BJP-backed Sajad Lone as the chief minister had he "looked towards Delhi".

"Had I looked towards Delhi (the centre), then I would have been forced to invite Sajad Lone to form the government. Then I would have gone down in history as unscrupulous. But I ended the whole thing. Those who want to abuse me can do so, but I am convinced I did the right thing," Malik stressed at an event in Gwalior on Saturday.

"My statement cannot be manipulated in any way that the Centre was interested in Sajad Lone. I only said, if I would have asked them, they might have said Sajad Lone. I did not ask them and they did not tell me," he told NDTV.

Reacting to this, former chief minister Omar Abdullah tweeted: "My compliments to Governor Malik for not looking to Delhi & for not taking their instructions thereby stopping the installation of a government of the BJP & it’s proxies formed by horse trading, defections & use of money."

Mehbooba Mufti, another former CM, said: "Leaving aside the fax machine fiasco , good to see that governor Sb refused to take dictation from Delhi , rather opted for dissolution of assembly. This could be unprecedented, given the story of democracy in the state."

Mulfi had to resign from chief ministership last June after the BJP withdrew support to her government.

The state of Jammu and Kashmir is under the Governor's rule since June.