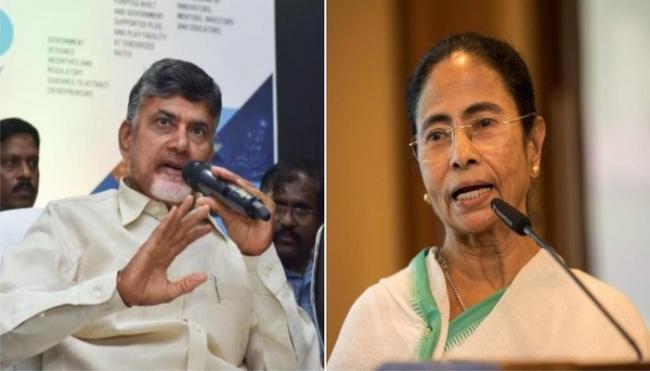 Kolkata, Nov 18 (IBNS): Even as the grand alliance of opposition parties failed to take off across India so far, Andhra Pradesh Chief Minister N Chandrababu Naidu met West Bengal Mamata Banerjee on Monday in Kolkata and said all parties, who are against the ruling saffron brigade, will come together to "protect the nation".

While BSP chief Mayawati recently ruled out aligning with the Congress calling it a snake and equating it with the BJP,  Naidu met the Bengal chief minister in the West Bengal state secretariat Nabanna.

Naidu said the parties will meet before the Winter Session of the Parliament.

"All those who are opposing BJP will come together and chalk out the future course of action," Naidu told reporters.

Speaking to reporters, Naidu said: "We are seeing for the past few days that democracy in this nation is in danger. All institutions are under threats. In this scenario, we want to save the nation."

He said he had a 'good' discussion with Mamata Banerjee.

"We had a very good discussion today," he said, days after the BJP called the moves of Chandrababu Naidu and Mamata Banerjee to bar CBI from carrying out investigations in their respective states an alliance of corrupt parties.

"We want to protect the nation," he said.

Mamata said: "We are all together. We are working together. We will save the nation from the BJP government."

Naidu and Mamata are meeting to forge an alliance ahead of the Lok Sabha polls but certain differences have emerged in the anti-BJP group with Bahujan Samaj Party and Samajwadi Party criticising the Congress over the past few days.

Criticising the Congress and the Bharatiya Janata Party by calling both the parties as "Saanpnath" and "Naagnath" (both snakes), Bahujan Samaj Party supremo Mayawati recently said she will not form an alliance with the political outfits in Chhattisgarh.

She said she will prefer to sit in the opposition in the state.

"We are confident of winning an absolute majority. There is no question of taking support from anyone. Even if we don't get a majority, we will sit in opposition but will not go with either the BJP or Congress," she was quoted as saying to a TV channel.

She made the remarks at a time when the first phase of voting in the Assembly polls in Chhattisgarh was held on Nov 12.

The second phase of polling will take place on Nov 20.