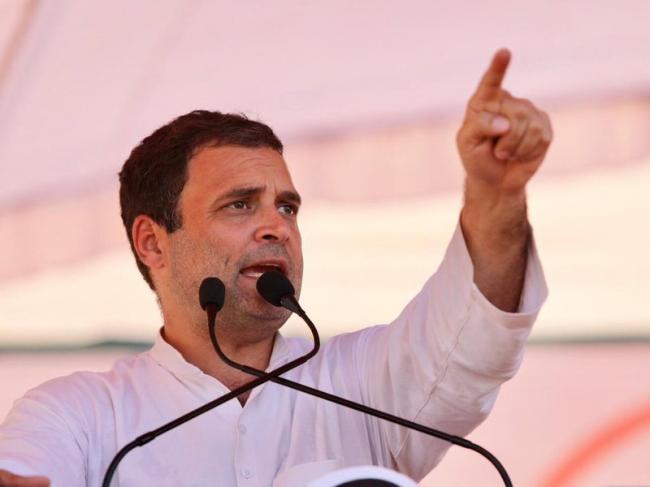 New Delhi, Oct 26 (IBNS): Congress president Rahul Gandhi on Friday led his party's protest against the Union government's decision to send Central Bureau of Investigation (CBI) chief Alok Verma on leave, the move which has been termed by the 48-year old opposition leader as "unconstitutional", in the national capital.

Rahul has marched from Dayal Singh College on Lodhi Road to the CBI headquarters.

Launching a fresh attack on Prime Minister Narendra Modi, Congress president Rahul Gandhi on Thursday said the removal of Central Bureau of Investigation (CBI) chief without consulting the Chief Justice of India and leader of the Opposition is unconstitutional and illegal.

Questioning the timing of the removal of the CBI chief, Rahul said: "The main reason for this removal of CBI Director at midnight is that the CBI was going to begin an investigation on the role of PM in Rafale scam and the corruption carried out by him."

Alleging a cover up of scams by the Bharatiya Janata Party (BJP)-led central government, the Congress chief said: "Not only was the CBI Director removed, his office too was sealed and incriminating documents were taken."

Thousands of protesters join Congress President @RahulGandhi in a protest at the CBI Headquarters in Delhi. #ModiSeCBIBachao pic.twitter.com/Tc29hEGRYW

Challenging his removal, Verma had moved the Supreme Court which on Friday said the alleged bribery case, which involves the exiled CBI chief, must be probed in two weeks. The top court will hear the case next after Diwali on Nov 12.

Chief Justice of India (CJI) Ranjan Gogoi also said interim CBI chief M Nageswar Rao, who has been appointed by the Centre after removing Verma, will be the administrative head of the federal probe agency but cannot take any policy decision.

Asthana too moved the apex court on Friday against his removal by the Centre.