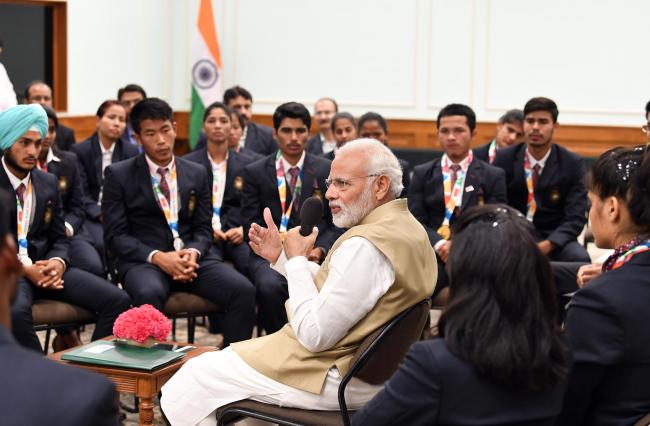 Welcoming guests from India and abroad, the Prime Minister noted that this is the first time that the India Carpet Expo is being organized at the Deendayal Hastkala Sankul, in Varanasi.

He mentioned Varanasi, Bhadohi and Mirzapur as important centres of the carpet industry.

He spoke of efforts being made to encourage handicrafts, small and medium industries.

The Prime Minister said that India has a long tradition of handicrafts, and Varanasi has played a key role in this regard. In this context, he mentioned the great saint poet, Kabir, who also belonged to the same region.

He said handicrafts have been a source of inspiration, in the freedom struggle, and for self-reliance.

In this context, the Prime Minister mentioned Mahatma Gandhi, Satyagraha, and the Charkha.

The Prime Minister said that India is today the biggest producer of carpets, and has about 35 percent of the global marketshare.

He spoke of the impressive export performance of this sector.

He said the rising middle class, and the support provided to the carpet industry are two key factors behind the growth in this sector. He appreciated the skills of the carpet makers, which have made the “Made in India carpet” a big brand.

He spoke of the logistic support being provided to carpet exporters, and the creation of world class laboratories to ensure quality. He also spoke of other facilitation measures, including modern looms and credit facilities being made available to the sector.

The Prime Minister asserted that the Union Government is committed to ensuring that the skill and hard work of the carpet makers, becomes one of the strengths of the nation.