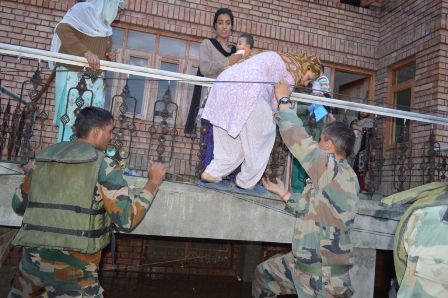 34 died in flood aftermath in past week: Kashmir Minister

By Saleem Iqbal Qadri | | 14 Sep 2014, 08:06 pm
#Kashmir flood, # Kashmir situation, # Flood relief in Kashmir
Srinagar, Sept 14 (IBNS) Kashmir Animal and Sheep Husbandry Nazir Ahmad Gurezi on Sunday said that 34 people died in the aftermath of devastating flood in the past one week in Jammu and Kashmir even as the total death toll since the calamity struck the state crossed 200.

"There were 34 deaths so far in past around one week. We are trying our best to restore the national highway while the rehabilitation process is almost complete," he told IBNS in a phone interview. Gurezi said every day the government is holding review meeting  in the presence of Chief Minister Omar Abdullah. He said 12 pumps are being brought from the centre to flush out the stranded water in Srinagar and other parts while a central team will also help dispose of the decomposed animal carcasses. However, though Army and NDRF rescue and relief continued and water is receding, discontentment among people is rising in some areas with many denied relief so far. Many residents alleged that only people who have connections are being rescued. Our correspondent said people are themselves now going to the rehabilitation camps. Many people are missing with almost every affected family still not united, according to reports.  However, internet and phone networks are yet not restored in large parts and even ATMs were not working.  MET office here said the weather would remain normal.  Meanwhile the Army said over 1,84,000 persons have been rescued so far by the Armed Forces and NDRF from different parts of Jammu & Kashmir in the ongoing rescue and relief operations. Thirteen tonnes of water purifying tablets and six water filtration plants with a capacity to filter 1.2 lakh bottles per day has already reached Srinagar.

Engineering stores including suction pumps from Vishakhapatnam have reached the flood affected area.
More heavy duty pumps being airlifted from Jodhpur and Raipur today. Sewage pumps from Delhi have also been dispatched to the valley. Thirty generator sets of 3 to 5 KVA capacity have also been sent to Srinagar to augment continuous power supply in relief camps and field hospitals. Additional communication equipment of BSNL are being dispatched to restore the communication systems in the State.

A total of 8,200 blankets and 1392 tents were provided to the flood victims. Eighty medical teams of the Armed Forces Medical Services are already operating in full swing. Four Field Hospitals have been established in Avantipur, Pattan, Anantnag and Old Airfield where medical aid is being provided to the ailing people. Till now they have treated around 51,476 patients. Two additional fully equipped field hospitals with laboratory testing equipment facility have also been established in Srinagar. More relief materials including blankets and tents, water bottles from IRCTC and food packets are being airlifted from Patna, Delhi, Ahmedabad and Amritsar.

Eightyfour transport aircraft and helicopters of Indian Air Force and Army Aviation Corps are continuing their efforts in rescue and relief operations. Army has deployed around 30,000 troops for rescue and relief operations in the flood affected area. More than 5,08,000 litres of water, 3,10,000 food packets and over 1054 tonnes cooked food have already been airdropped and distributed in the flood-affected areas.

So far 2253 sorties were undertaken by the helicopters and aircraft of Armed Forces and 3017 tonnes of relief materials have been dropped by the Indian Air Force. A total of 224 boats of Army and 148 NDRF’s inflatable boats are actively involved in the rescue operation.

Armed Forces have also established 19 relief camps in Srinagar and Jammu region. In Srinagar region, camps were established at BB Cantt, Avantipur, Old Airfield, Sumbal, Chattargam and Jijamata Mandir, where thousands of rescued people are being sheltered. They are also being provided with food and other basic amenities.

To restore the road connectivity, five task forces of Border Roads Organisation, which include 5700 personnel, have been deployed in Srinagar, Rajouri and Akhnoor. As of now, they have restored the road connectivity from Batote – Anantnag and Srinagar – Sonamarg. Srinagar – Baramulla road is now open for light vehicle. On the Jammu – Srinagar highway, BRO personnel have cleared the road up to KM 172 (Ramsu). Work is in progress to clear fresh landslides in areas that were cleared yesterday on this road.