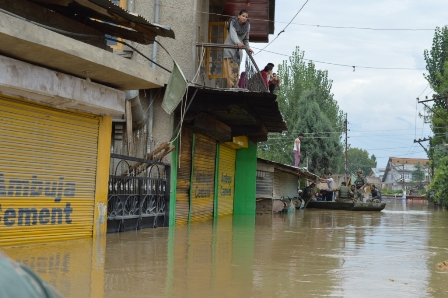 By Kavita Suri | | 14 Sep 2014, 07:26 pm
#Kashmir floods, # Loss in Kashmir floods
Jammu, Sept 14 (IBNS): Even as Srinagar city continues to suffer due to recent floods in the entire state and over five lakh people are still stranded in the valley, the calamity in Jammu and Kashmir has caused an immediate loss of Rs 5,400-5700 crore, well exceeding 10 % of the stateâ€™s GDP with heavy damages to trade, hotels,restaurants, horticulture and handicraft besides throwing completely out of gear basic infrastructure of power, railways and communication.

According to the rough estimates by ASSOCHAM, Associated Chambers of Commerce and Industries of India, the total loss estimated are Rs 2,630 crore only to the hotels,trade, agriculture-horticulture, roads and bridges in the Jammu and Kashmir regions of the state while the Ladakh region was spared of the calamity, worst in several decades. The high- cost infrastructure like the Railways, power and communication in the hilly terrains would have suffered a loss of about Rs 2,700-3000 crore. The ASSOCHAM estimates based on inputs from its state constituents underlined that these were only initial estimates of the loss. "The real loss to the Jammu and Kashmir economy will be much higher since the impact of such calamities are long-drawn and it takes long time before the physical infrastructure is restored. The biggest worry is the shattering of confidence among the tourists and it will take long time and effort to win back the tourists to the state- the lifeline sector,” ASSOCHAM Secretary General Mr D S Rawat said while releasing the ASSOCHAM paper. He said, the other Himalayan state of Uttarakhand which also witnessed unprecedented flood fury last year, is yet to recover from the shocks. It is all the more difficult in the states where economy is heavily dependent on the tourism related sectors like trade, hotels, eateries, transport, aviation etc.

The state economy stood at Rs. 45,399 crore in 2013-14. The sectoral composition of State GDP indicates that Agri & allied activities account for 20 percent in the State GDP, Industry and mining contribute to about 23.5 percent and the services sector made up the remaining 56.5 percent. Trade, hotels and restaurant services registered a turnover of close to Rs. 3,800 crore in the year to March 2014.

The tourism industry sources of J&K State roughly distribute the tourists among Jammu, Kashmir and Ladakh region in the ratio of 40:40:20. Thus, the total loss suffered by the state in terms of agriculture production, trade hotels and restaurants, and roads and bridges is projected to be in the range of Rs. 2,630 crore. About equal or slightly more damage is estimated to have been caused to the power network, railways, water and communications .

The September-November season tourist inflow both from India and abroad is severely affected as is being witnessed by large scale cancellations. While cancellations for airlines, hotels are 100 per cent upto October 15, those who had booked for winters are watching the situation, feedback from the ASSOCHAM travel constituents indicated. September end to November is the peak season for domestic travelers into J&K.
Related Images