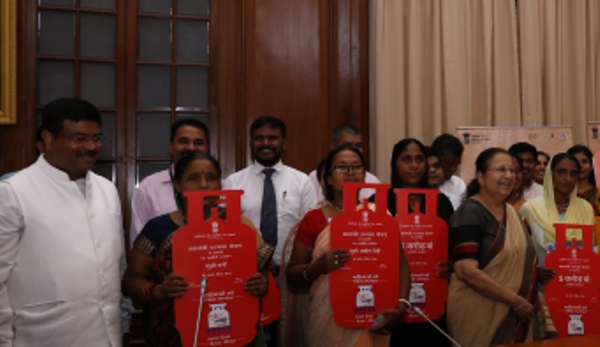 Speaker while acknowledging the vision of Prime Minister and leadership of Dharmendra Pradhan Minister of petroleum & Natural Gas,  appreciated the collective efforts of the officials of Ministry and the Oil Marketing Companies in achieving the target of 5 crore.

Further, shared advantages of using LPG in terms of health benefits, time saved and ensuring safety of women.  Government led by  Prime Minister Narendra Modi launched Pradhan Mantri Ujjwala Yojana (PMUY) on 1st May, 2016 and it is implemented by Ministry of Petroleum and Natural Gas through its Oil Marketing Companies i.e, IOC, BPCL and HPCL through their network of distributors across the country.

In a record time of 28 months for its launch, PMUY achieved the initial target of providing 5 crores LPG connection to BPL households.

In the current year, considering the huge success of the Scheme, target was revised to 8 crore with budgetary allocation of Rs 12,800 crore.

PMUY has been recognised by World Health Organisation as one of the decisive intervention by the Government to address the Indoor Air Pollution which accounts for nearly 10 lakh deaths in a year in the country.