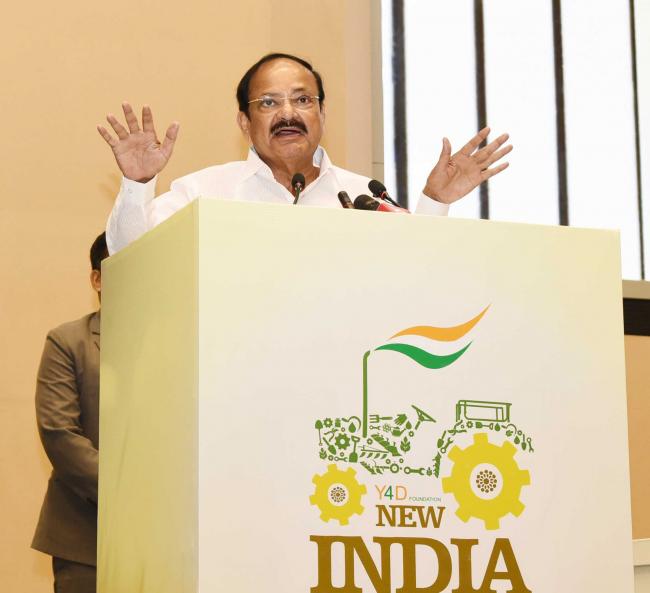 Women empowerment is not only a national goal but also a global agenda: Vice President Naidu

New Delhi, July 16 (IBNS): Vice President of India M. Venkaiah Naidu has said that empowerment of women is central to achieving the objective of inclusive, equitable and sustainable development and it is not only a national goal but also a global agenda.

He was addressing the gathering after inaugurating the International Conference on ‘Empowering Women: Fostering Entrepreneurship, Innovation and Sustainability’ organized by the NITI Aayog and Shri Ram College of Commerce, here on Monday.

The Lt. Governor of Puducherry, Dr. Kiran Bedi, the Vice Chancellor of Delhi University, Prof. Yogesh Tyagi and the CEO of NITI Ayog, Amitabh Kant and other dignitaries were present on the occasion.

The Vice President said that it is beyond doubt that given the right opportunities and proper environment, women have excelled in different spheres of life.

He also stressed on the need to create suitable conditions to facilitate and encourage women to have full, active and unhindered participation in social, economic, political and public life so that their potential is realized fully for the benefit of the society.

The Vice President that women face discrimination and exploitation in varying degree and occupy limited space in social, economic and political realms, despite the significant progress made towards the gender equality and empowerment of women through national policies.

Mass media like cinema should play a critical role in empowering women and women should be given equal property rights, he added.

The Vice President said that lack of equal access to education & employment, inequalities in the labour market, rising sexual violence and unequal division of unpaid care and domestic work remain the key barriers to their advancement.

Saying that gender disparity hinders women’s empowerment and their integration in mainstream, the Vice President argued for a major shift in our mindset which would lead to a positive attitude towards women and their role in society.

The Vice President said that women's active participation in decision-making has a positive impact on education, health, nutrition, employment and social protection.

Women’s empowerment has a multiplier effect not only on their own lives but also on the family and the society, he added.

Stressing on the need to educate the girl child, the Vice President said that rise in female education levels have a positive impact such as reduction in infant and child mortality rates and improvement in family health.

If women had the same access as men to productive assets, agricultural output would rise, reducing the number of undernourished people, he added.

Following is the text of Vice President’s address:

“I am pleased to be a part of this joint initiative by the NITI Aayog (National Institution for Transforming India) and Shri Ram College of Commerce (SRCC) on the theme “Empowering Women: Fostering Entrepreneurship, Innovation and Sustainability”.The shared efforts of these two important institutions in creating a platform to discuss the challenges faced by women entrepreneurs for securing the country’s economic development have been truly praiseworthy.

Empowerment is a multi-faceted, multi-dimensional and multi-layered concept.

What is most significant in this process is the control over thoughts and perceptions that shape individual beliefs, values and attitudes. This control, in turn, confers decision making power which increases access to and control over resources.

Empowerment of all sections of the society is central to democracy as it contributes to make democracy truly participative.

Women's empowerment as a concept was defined as a redistribution of social and economic powers and control of resources in favour of women.

Women should be given equal rights in property.

Women have historically been disadvantaged in accessing not only material resources like property and credit, but also have been deprived of resources like market information and business technologies. All of these factors have had a negative impact on the type of enterprises that women are engaged in. This has not only lowered the status of women but also resulted in keeping women outside the ambit of development.

We have come a long way from that stage.  Today, empowerment of women is central to achieving the objective of inclusive, equitable and sustainable development.  It is not only a national goal but also a global agenda.  UN’s 17 Sustainable Development Goals (SDGs) which aim to end poverty, promote prosperity and people’s well-being while protecting environment have gender equality as one of its key goals.

Women constitute nearly half of the world population and they are major stakeholders in development process. It is, therefore, important that suitable conditions to facilitate and encourage their full, active and unhindered participation in social, economic, political and public life are created so that their potential is realized fully for the benefit of the society. It is beyond doubt that given the right opportunities and proper environment, women have excelled in different spheres of life.

While significant progress has been made towards the gender equality and empowerment of women through national policies and legislations all over the world, girls and women especially in developing countries continue to face challenges to realise their full potential due to various factors.

They often face discrimination and exploitation in varying degree and occupy limited space in social, economic and political realms.

Lack of equal access to education and employment, the existence of huge inequalities in labour market, rising sexual violence and exploitation, gender discrimination and unequal division of unpaid care and domestic work, prevalence of harmful social practices such as early child and forced marriage, low representation of women in representative institutions, etc. remain the key barriers to their advancement.


The gender disparity in various spheres hinders women’s empowerment and their integration in national mainstream and raises fundamental question of social justice. This requires a major shift in our mindset which would lead to a positive attitude towards women and their role in society.

Women’s empowerment has a multiplier effect not only on their own lives but also on the family and the society.


There was an interesting report on the Role of Women in Development by the UN World Survey in 2014. According to the report, women's active participation in decision-making has a positive impact on education, health, nutrition, employment and social protection.

For example, as female education levels rise, infant and child mortality rates fall and family health improves. Women's increased earning capacity has a positive effect on children's nutrition, health and educational prospects.
It is a common knowledge that when more women work, economies grow. If women had the same access as men to productive assets, agricultural output would rise, reducing the number of undernourished people.

In India women have multiple responsibilities, as home providers and producers, therefore, they tend to engage in activities that are home-based. This had, in turn, restricted their mobility and limited their scope for better economic opportunities.

A recent World Bank report has revealed that women employers tend to hire mostly women.  This may be partly because of the kind of businesses set up by women entrepreneurs, such as small tailoring unit, beauty and wellness saloon, etc.  Many of such women-owned firms offer only meagreemployment at nominal rate of 1-2 person per unit, giving credence to the finding that large number of women entrepreneurs are micro-household enterprises supplementing their family income.

Given the fact that women have been doing exceedingly well in higher professional education, we need to ensure their commensurate participation in formal economy. NITI Aayog and the country’s premier educational institutions, I know, are engaged in chalking out a roadmap in developing women entrepreneurs.  I wish them all success.

As far as developing a strong base for women entrepreneurship in India is concerned, we have a long way to go.

The current scenario is hardly impressive.  Today, India ranks 52 out of 57 nations on the Women Entrepreneurship Index. We need a multi-pronged strategy to improve our position.

It makes all of us very proud to know that the NITI Aayog has made an assessment that in India, women entrepreneurs are emerging fast.

They have developed the Women Entrepreneurship Platform (WEP) to create awareness, to bring visibility to existing Government schemes pertaining women entrepreneurs, to identify partners and to leverage all the efforts being made in this direction.

This comprehensive platform, I am sure, would help the aspiring women entrepreneurs to pursue their business ideas with ease and confidence.

Requisite policy framework is also being developed by the Government with the help of NITI Aayog to maximize the potential of women entrepreneurs in building independent career option for them.

The CEO, NITI Aayog, Shri Amitabh Kant and others have spoken in detail the efforts being made to promote women entrepreneurship in the country.  Truly, the Government, under the leadership of Prime Minister Shri Narendra Modi, has taken up this in a mission mode and a number of women-friendly schemes have been launched.

In 2016 under the Standup India Scheme, the Government has sanctioned around 21735 loan claims worth nearly Rs.4748 crore.  Out of the total number of loan sanctioned under the Scheme, 80 per cent was for women entrepreneurs.  Under the Scheme, the Scheduled Commercial Banks are mandated to provide two bank loans for the setting up of Greenfield enterprises, out of which one is reserved for women entrepreneurs.

The Micro Units Development and Refinance Agency (MUDRA) launched by Prime Minister Shri Narendra Modi in 2015, has been providing micro finances to entrepreneurs in a significant way.

The biggest beneficiaries of this Scheme are women. Almost 8 out of 10 accounts opened for availing loans of less than Rs. 50,000 are for women.

However, this number has substantially declined to 9 per cent when it comes to accessing higher loan amounts between Rs.5 to 10 lakh.  This is an issue which needs to be addressed.

I am sure, the WEP of NITI Aayog will come to the aid of the future women entrepreneurs and professionals in accessing more credit for their business ventures.

The micro-finance programme of the Government has not only given women access to savings and credit but also brought them together regularly in organized groups.

It would be worth mentioning that in three years between 2011-14, only 5 lakh Self-Help Groups (SHGs) were formed covering 52 lakh families.  The number has gone up as many as four times with additional 20 lakh SHGs formed covering 2.25 crore families since 2014.  At present, there are 45 lakh SHGs with active participation of around 5 crore women in rural areas.

No doubt, this is an incredible achievement.  But if we wish to leverage the full potential of the SHGs, we need to expand their presence across the States, facilitate hassle-free credit and make them active partners in the country’s economic growth and social cohesion.

A new India is emerging.  In building this new India, all sections of our society have to play their roles.

Women who constitute nearly 50 per cent of our population have a greater role to play in the task of nation building.

We cannot achieve a double digit growth without their active participation.  We are cognizant of the potential of the women power.  To realise their potential, the Government as well as the civil society must come forward.

They wish to break free and we must facilitate them.  Only thentheir boundless energy and innate potential would be unleashed to the task of national reconstruction.  I am sure, this conference will be an important initiative in this direction.

I urge NITI Aayog to continue its efforts in tapping the potential of women entrepreneurs right from the college level across the country.

With these words, I wish all participants and delegates a very productive and constructive dialogue.