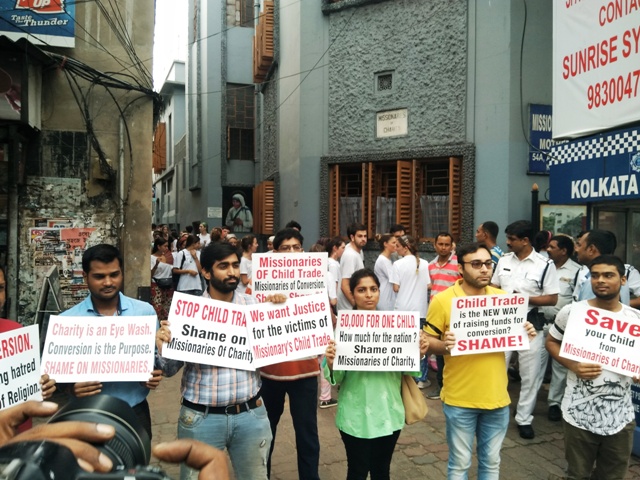 Kolkata, July 8 (IBNS): A silent protest was held outside Missionaries of Charity (MoC) headquarters on AJC Bose Road in Kolkata on Sunday over the recent arrest of two nuns of the Mother Teresa founded order in Ranchi for their alleged involvement in selling newborn.

The protest was initiated by ‘India-First’, a group identifying themselves as nationalists and socialists.

People were seen wearing black ribbons on their hands and holding placards as they demonstrated outside the building of the charity founded by Nobel laureate Mother Teresa.

According to a member of India-First, Sourav Kumar Mishra, the nuns were caught in Ranchi as the couple lodged the case against illegal trade when they did not receive the child even after paying lakhs, but the racket of baby trafficking undertaken by them may be much bigger than the imagination.

He added that 'the silent illegal trade of children behind the name of charity will not be tolerated and such shameful activity against humanity and nation has to be stopped.'

The protesters demanded fair trial of the case and a CBI investigation into the matter.

The police on Wednesday arrested a woman staff working at the Ranchi Missionaries of Charity for allegedly selling infants born to unwed mothers, who deliver babies at the institution, media reports said.

Two nuns have also been detained in connection with the case.

An FIR has been lodged under Section 370 of IPC.

The FIR was lodged based on the complaint of Child Welfare Committee.

The fact that a child was missing from the institution came to light when CWC members went on regular inspection.

On being questioned, a nun told CWC members that the mother of the newborn child has taken him away.

When the mother was contacted she said she did not have the child with her.

On further probe, it was revealed that the child was sold to a UP-based family for Rs 1.2 lakhs.

The UP family reportedly told CWC that the money was taken from them as "hospital fees."

While Missionaries of Charity stopped the adoption in 2015, the Ranchi based unit continued to do so.