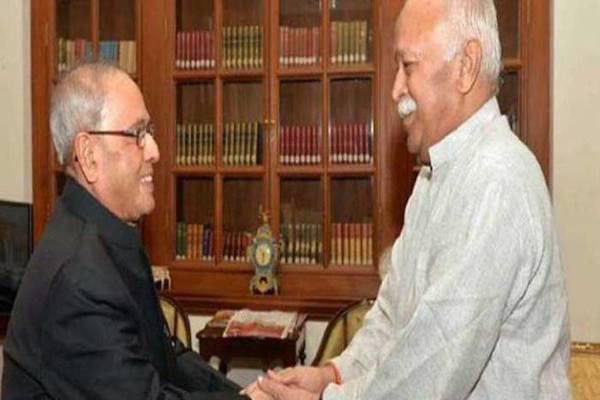 New Delhi, Jun 7 (IBNS): Despite disapprovals and dismays by his former party Congress, ex-President Pranab Mukherjee on Thursday triggered a political firestorm by attending an event in Nagpur at the headquarters of the Rashtriya Swayamsevak Sangha (RSS), a right-wing Hindu voluntary organisation and ideological patron of the ruling BJP at the centre.

At 7 pm, Mukherjee is expected to deliver his speech which the RSS said is going to be an invaulable opportunity to hear from an experienced person like the former Indian finance minister.

Mukherjee's acceptance of the RSS invite has triggered a massive row with several Congress leaders including the former President's daughter Sharmistha expressing dismay in public.

"Hope @CitiznMukherjee now realises from todays’ incident, how BJP dirty tricks dept operates. Even RSS wouldn’t believe that u r going 2 endorse its views in ur speech. But the speech will be forgotten, visuals will remain & those will be circulated with fake statements. 1/2," Pranab Mukherjee's daughter tweeted.

Hope @CitiznMukherjee now realises from todays’ incident, how BJP dirty tricks dept operates. Even RSS wouldn’t believe that u r going 2 endorse its views in ur speech. But the speech will be forgotten, visuals will remain & those will be circulated with fake statements. 1/2

Senior Congress leader Ahmed Patel, who is known to be a close aid of United Progressive Alliance (UPA) chairperson Sonia Gandhi, tweeted to say, "I did not expect this from Pranab da !"

I did not expect this from Pranab da ! https://t.co/VBqXZ8x7SE

Though several Congress leaders had reacted to the decision of Mukherjee, it is clear that the latter is eyeing a role independent of his political past since 1969, when he was elected to the Rajya Sabha with the support of late Prime Minister Indira Gandhi. According to media reports, some Congress leaders had urged him to reconsider his decision to attend a function of the saffron outfit which has always been denounced as a communal force by Mukherjee's party and allegedly the former President himself.

Reacting to the row, Mukherjee had said he will speak only at the event, scheduled to be held on Thursday.

In a blog post on the RSS website, it said: "There has been unseemly outrage amongst certain sections of the political class on former president Pranab Mukherjee's acceptance of an invitation as chief guest for the concluding ceremony of the RSS's Tritiya Varsh Training programme. Mukherjee is a mature and experienced politician who has spent decades in public life."

"He has well-evolved ideas on matters that are of social and national significance. The invitation has been extended to him with the view that this will be an invaluable opportunity to listen to his views. Also, he will have the opportunity to listen to the views of the Sangh and have a firsthand experience of Sangh as well. This exchange of views and ideas is intrinsic to the Bharatiya concept of dialogue, this invitation and its acceptance is but a continuation of that democratic tradition, enshrined in our cultural ethos."

The former President is reportedly going to be the chief guest at the valedictory function of the ‘Tritiya Varsh Varg’ or ‘third-year course’ of the RSS recruits on Thursday. He will address the new recruits too, said reports.