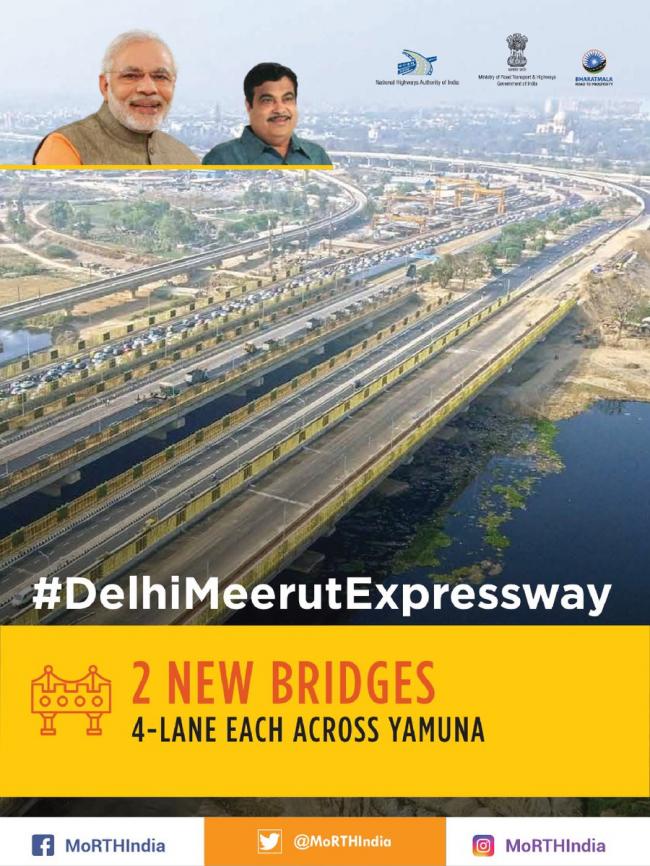 Before inaugurating the Rs 841 crore Expressway, the PM held a road show on the stretch of the same.

Modi on Sunday inaugurated the Phase 1 of the 14-lane Expressway stretching from  Nizammudin Bridge to Delhi-Uttar Pradesh border, and the Eastern Peripheral Expressway, both in Delhi NCR.

The Phase 1, consisting of 8.360 km stretch of the National Highway has been completed in 18 months, against the earlier expected construction period of 30 months, at a cost of about  Rs 841.50 crore .

It includes a 6-lane Expressway and 4+4 Service lanes, which makes it a 14-lane facility from Nizamuddin Bridge in Delhi to the Uttar Pradesh border.

The National Highway includes several features that would help reduce pollution, the Union Ministry of Road Transport & Highways said in a release.

These include a 2.5-metre-wide cycle track on either side of the highway, a vertical garden on the Yamuna Bridge, solar lighting system and watering of plants through drip irrigation only.

The foundation stone for the project was laid down by PM Modi Dec 31, 2015.

The Delhi- Meerut Expressway  project  aims to provide faster and safer connectivity between Delhi and Meerut  and beyond this, with Uttar Pradesh and Uttarakhand.

This will be the first expressway to have dedicated bicycle tracks on the nearly 28 km stretch between Delhi and Dasna.

The project involves construction of 11 flyovers/interchanges, fivemajor and 24 minor bridges, three ROBs (rail over bridges), 36 vehicular and 14 pedestrian underpasses. It will also have elevated section of 5.91 kms.

The second project, the 135 km long Eastern Peripheral Expressway (EPE), stretches from Kundli on NH 1 to Palwal on NH 2.

PM Modi had laid the foundation for this project in November, 2015.

The project has been envisaged with the twin objectives of decongesting and de-polluting the national capital by diverting the traffic not destined for Delhi, the Union Ministry of Road Transport & Highways said in its release.

The expressway has been  completed in nearly 500 days against the scheduled target of 910 days.

It is a fully access-controlled six-lane expressway.

Entry and exit on the expressway is through designated interchanges only.

The EPE has a closed tolling system in which toll will be collected only for the distance travelled and not for the entire length, according to the Ministry.

Weigh-in-Motion (WIMs) equipment have been installed at all 30 entry points of the Expressway to stop entry of over-loaded vehicles.

EPE has an iconic toll plaza 170 feet high, with 154 feet wing on either side. It will house the ITS control system of the entire EPE.

Under the toll plaza there is a digital art gallery with holographic models of major structures and making of the EPE.

This is the first Expressway in the country to use solar power on the entire length of 135 km.

There are eight solar power plants on this Expressway, with a capacity of 4000 KW (4 megawatt) for lighting of the underpasses and running solar pumps for watering plants.

Rainwater harvesting has been provided at every 500 meters on the EPE and there is drip irrigation for plants all along the expressway.

There are also 36 replicas of monuments depicting Indian culture and heritage.