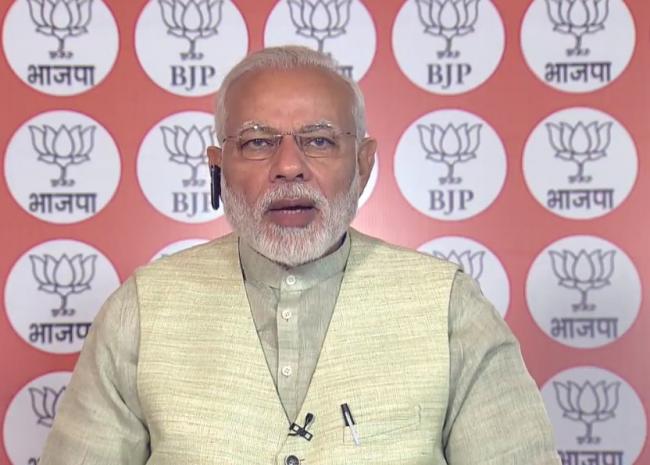 New Delhi, May 2 (IBNS): Prime Minister Narendra Modi on Tuesday attacked the Congress-led government in Karnataka and said due to its 'apathy' farmers in the state have not got the benefit of his government's 'Fasal Bima Yojna'.

"Due to the apathy of Karnataka govt, farmers in the state have not got the benefit of 'Fasal Bima Yojna," he said while interacting with Kisan Morcha Karyakartas of Karnataka.

Modi said a Karnataka should be ruled by a government which will work for the development of farmers.

"A sensitive govt, which works for the development of farmers is needed in Karnataka. Farmer’s leader in Yeddyurappa Ji will work with renewed vigour in our efforts to double farmer’s income," Modi said.

BS Yeddyurappa is the chief ministerial face of the party in poll-bound Karnataka.

Speaking on the activities of his government, Modi said: "Around 3.5 crore farmers have been covered under PM Fasal Bima Yojana, out of which 14 lakh farmers belong to Karnataka."

Poll in Karnataka is scheduled to be held on May 12.

The counting of votes will take place on May 15.

The Karnataka poll has virtually turned out to be a battle between present and former Chief Ministers, Siddaramaiah and Yeddyurappa respectively.

Yeddyurappa is the Bharatiya Janata Party's (BJP's) Chief Ministerial candidate in the poll.