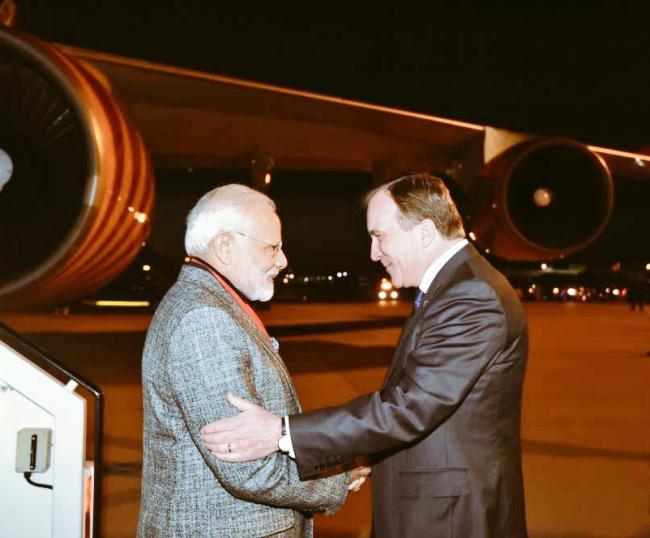 He was welcomed to the nation by Swedish Prime Minister Stefan Löfven.

Modi will attend the first ever India-Nordic Summit in the country.

Landed in Stockholm. I thank Prime Minister Stefan Löfven for the warm welcome at the airport. @SwedishPM pic.twitter.com/nJuqebdiOr

Modi is the first Indian Prime Minister to visit the nation in 30 years.

MEA spokesperson Raveesh Kumar tweeted: "Scripting history! PM @narendramodi arrives in Stockholm on a first bilateral visit by an Indian PM in 30 years to a warm and personal welcome by @SwedishPM Stefan Löfven at the airport and to participate in the first ever India-Nordic Summit."

Before leaving for Sweden and the UK, Prime Minister Narendra Modi on Sunday said he is hopeful that the visits to the two nation will be useful in enhancing our engagement with these countries.

"I am confident that these visits to Sweden and UK will be useful in enhancing our engagement with these countries," Modi said prior to his visit to Sweden.

He will be visiting the United Kingdom to attend the Commonwealth Heads of Government Meeting.

He is visiting the two nations between Apr 17-20.

"At the suggestion of German Chancellor Angela Merkel, Prime Minister Narendra Modi will be making a brief stopover in Berlin on 20 April after completing his visits to Sweden and the United Kingdom. During his visit, PM will meet Chancellor Merkel and the two leaders will exchange views on a number of bilateral, regional and global issues," read a statement issued by the MEA.

"This will be the first meeting between the two leaders since Chancellor Merkel began her fourth term on 14 March 2018," it said.