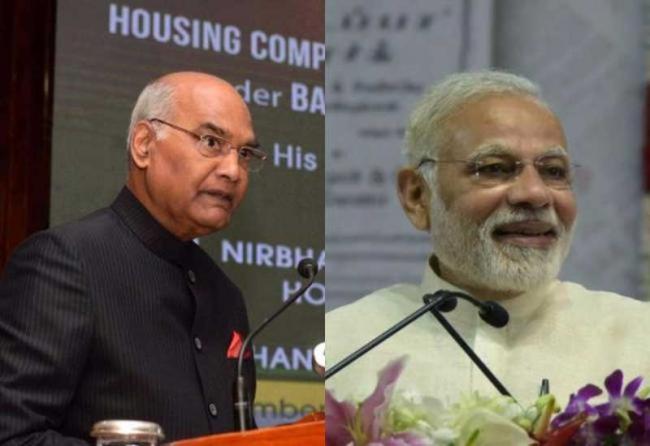 Wishing people on Ambedkar's 127th birth anniversary, Kovind tweeted : " Homage to Dr B.R. Ambedkar on his birth anniversary. An icon of our nation, Dr Ambedkar was a multifaceted personality who waged a life-long struggle for a modern India free of caste and other prejudices, ensuring equal rights to women and for the disadvantaged."

Kovind also greeted the people on Vaisakhi, Vishu, Rongali Bihu, Naba Barsha, Vaisakhadi, Puthandu Pirappu. "These festivals reflect our country’s shared heritage amid diversity and plural traditions. May the occasion bring prosperity to all," he tweeted.

Prime Minister Modi said in his tweet : "Greetings on Ambedkar Jayanti. Pujya Babasaheb gave hope to lakhs of people belonging to the poorest and marginalised sections of society."

" We remain indebted to him for his efforts towards the making of our Constitution." he said.

The Prime Minister also greeted the people of Kerala on Vishu : "Happy Vishu! May the new year bring with it new hopes, more prosperity and good health."

He  greeted the people of Assam on Rongali or Bohag Bihu which marks the beginning of the Assamese New Year.

He described Bihu as a festival characterised by energy and enthusiasm. "May this auspicious day bring happiness and good health in our society."

"Baisakhi Greetings to everyone. May this festival bring joy in everyone's lives. We also express gratitude to our hardworking farmers, who work continuously to feed our nation," he added.