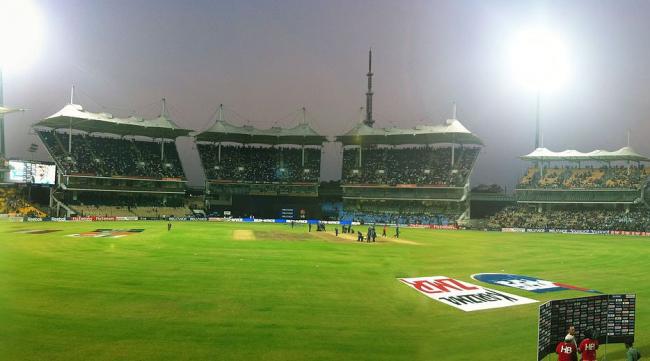 Security beefed up in Chennai stadium for IPL match between CSK, KKR

Chennai, Apr 10 (IBNS): Amid protests over delay in Cauvery board ,security arrangements have been beefed up in Chennai's Chepauk Stadium for the Indian Premier League match between Chennai Super Kings (CSK) and Kolkata Knight Riders (KKR) on Tuesday.

Security arrangements have been heightened to ensure that the match between the two former champions teams is played without any hindrance.

Several political parties and fringe groups have been demanding for cancellation or postponement of IPL matches in Chennai this season till the Central government forms the Cauvery Management Board.

Some people reportedly tried to demonstrate outside the stadium on Tuesday but police removed them from the spot.

The Hindu reported the Chennai city police on Tuesday arrested 10 members of the Tamizhaga Vaazhvurimai Katchi (TVK) when they attempted to enter M.A. Chidambaram Stadium, where a cricket match of the Indian Premier League is scheduled to be held in the evening.

The police said security arrangements have been made to ensure the match is played in a peaceful manner.

"We have taken all measures to maintain law and order and ensure the match is held in a peaceful manner. The spectators will be allowed inside the stadium only after thorough frisking," a senior police official  told The Hindu.

Last month, the Supreme Court had ordered an increase in water share for Karnataka while delivering a judgement on the Cauvery river dispute.

The sharing of waters has been a contentious issue between Tamil Nadu and Karnataka since 1892, with the debate growing stronger in 1924 between the erstwhile Madras Presidency and Kingdom of Mysore.

The Cauvery, which flows through Karnataka and Tamil Nadu, is the third largest river -- after Godavari and Krishna -- in south india and is considered the lifeline of Tamil Nadu and Southern Karnataka.