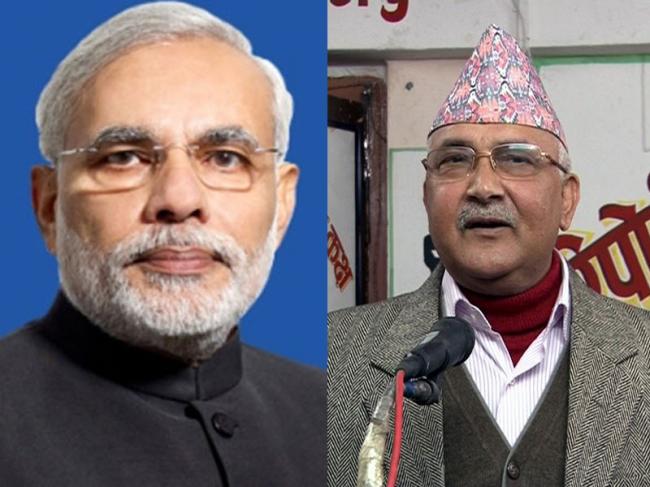 New Delhi, Apr 7 (IBNS) :  Nepal Prime Minister KP Sharma Oli who is on a three-day visit to India, met his Indian counterpart Narendra Modi at the Hyderabad House in the national capital on Saturday to hold delegation-level talks before signing a number of agreements, reports said.

The two will also deliver press statements after the talks. This is Oli's first visit to the country after he assumed office as Prime Minisater  for the second term in February.

Earlier, the visiting dignitary received a ceremonial welcome in the Rashtrapati Bhavan as he called on President Ramnath Kovind.

"India's abiding interest is in the stability and economic prosperity of Nepal. India stands ready to expand cooperation with Nepal as per Nepal's priorities", the President posted on Twitter after receiving  the Nepal PM at the  Rashtrapati Bhavan.

"No other countries in the world have the bonds of friendship and cooperation that exist between India and Nepal. Regular exchanges of visits at the highest political level demonstrate the priority that we attach to our special partnership", Kovind tweetd.

Oli along with his wife Radhika Shakya, also paid tribute to Mahatma Gandhi at Raj Ghat.

The Nepal PM   arrived in Delhi on Friday and was received at the airport by Home Minister Rajnath Singh. He met Prime Minister Narendra Modi in the evening shortly after arrival.

Besides official engagements in New Delhi, the Prime Minister of Nepal will be visiting G.B. Pant University of Agriculture and Technology in Pantnagar, Uttarakhand.

Oli is scheduled to return to Nepal on Apr 8.