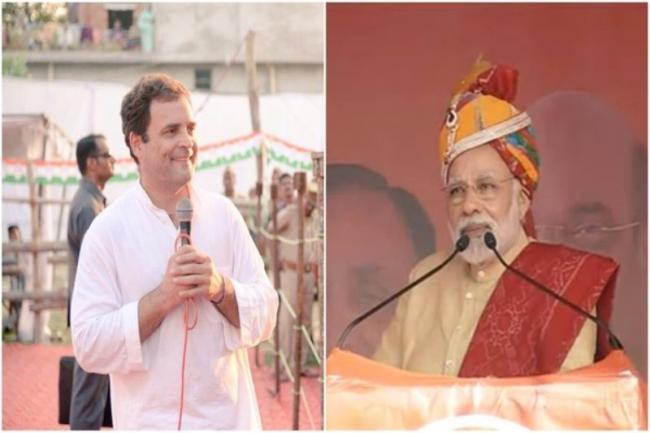 "Modi ji, the oppressive ideology you belong to can never respect Dalits and Babasaheb. Some examples of RSS/BJP ideology respecting Babasaheb," he tweeted.

Days after Dalit protest turned violent in several parts of north India, Prime Minister Narendra Modi on Wednesday said he was walking on the path shown by the architect of the county's constitution- BR Ambedkar.

Though he did not make any direct reference to the Bharat Bandh called by several Dalit Organisations on Monday, Modi, while speaking at the inauguration of the Western Annexe of Parliament House, said: "We are walking on the path shown by Dr. Babasaheb Ambedkar. At the core of Dr. Ambedkar's ideals is harmony and togetherness."

He said his government is working for the welfare of the poor section of the society.

"Working for the poorest of the poor is our mission," Modi said.

Modi said that it was the previous former PM Atal Bihari Vajpayee-led NDA government that had started identifying places of significance related to Ambedkar’s life. He said his government is paying tributes to Ambedkar.

"There are two places in Delhi, which are associated with Dr. Babasaheb Ambedkar, on whom the Vajpayee Government had made crucial decisions. It was our Government that got the opportunity to work on them and pay tributes to Dr. Ambedkar," Modi said.

Prime Minister Modi also announced that the memorial to commemorate Babasaheb Ambedkar, at 26 Alipur Road in New Delhi, which was the last home of Dr. Ambedkar, will be inaugurated on Apr 13.

A day after massive protests in several parts of the country, fresh violence broke out in Rajasthan on Tuesday as nearly 5,000 people set ablaze the houses of a sitting and a former Dalit MLA, media reports said.

The death toll in the violence since Monday rose to 11.

In the fresh violence, houses of a sitting MLA and a former MLA — both Dalits — in Hindaun and in Karauli district, were set ablaze.

Soon after the incident, curfew was clamped in Jaipur's Hindaun.

The Supreme Court has earlier rejected a plea to put stay on  its March 20 order diluting certain provisions of the Scheduled Castes and Scheduled Tribes (Prevention of Atrocities) Act, reports said.

The top court, however, put the matter to be heard after 10 days and asked parties to file their written submissions within two days.

While hearing observations by attorney general K K Venugopal on a review petition filed by the Centre, the apex court said: "We are not against the Act. Innocent should not be punished."

The SC on Tuesday  said the judgment in no way dilutes any provision of the SC/ST Act or rules and that the  Act does not mandate immediate arrest on filing of complaint.

"We have not diluted any provision of SC/ST Act and only safeguarded interest of innocents from being arrested. Provisions of the Act cannot be used to terrorise the innocents," the court said.

The review petion was filed by the Centre on Monday amid a countrywide unrest after several Dalit organisations called a Bharat Bandh in protest against what they alleged dilution of the SC/ST Act.