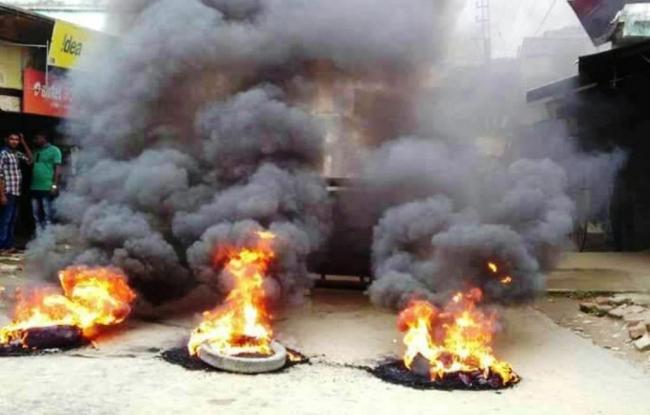 The unrest was reported from several parts of the nation on a day when the Centre file a petition with the Supeme Court seeking a review on its verdict on the   SC/ST (Prevention of Atrocities) Act, 1989.

According to reports, Madhya Pradesh bore the brunt of the violence as two persons were killed in Gwalior in clashes while one protestor died in Bhind and another in Morena.

One more death has been reported from Rajasthan.

Protesters clashed with the police and blocked railway tracks and highwatys in several of these states from where violence has been reported.

According to reports, hundreds of  protesters carrying swords, sticks, baseball bats and flags forced shopkeepers and other establishments in Punjab's Jalandhar, Amritsar and Bathinda to shut down.

Army and paramilitary forces were asked to be on standby in Punjab, where schools and colleges remained shut, with internet services suspended from 5 pm Sunday to 11 pm Monday

An irate mob of Dalit protestors is learnt to have attacked some police officials trying to clear a traffic jam in Uttar Pradesh's Ferozabad.

The Delhi-Dehradun highway has been completely blocked by agitators that has now left thousands stranded on the roads.

According to reports,  protesters pelted stones in Uttar Pradesh’s Agra and Madhya Pradesh’s Bhind, while shops were vandalised and railway tracks blocked in Jaipur. .

Protesters squatted on tracks in several places outside Delhi, stopping trains, including the Dehradun Express and the Ranchi Rajdhani. Train Services were disrupted when a mob arrived at the Ghaziabad yard.  Many trains, such as Saptakranti Express, Utkal Express and the Bhubaneswar and Ranchi Rajdhani as well as the Kanpur Shatabdi, were stopped ahead of Ghaziabad in Meerut and Modinagar, officials said.

Meanwhile, Union Information Minister Ravishankar Prasad announced that the Centre has filed a review petition with the apex court.

"I wish to convey that today we've filed a petition on the judgement by Supreme Court on the SC/ST act. We have filed a comprehensive review petition which will be presented before the court by the senior lawyers of the government," he said.

The petition will be taken up for hearing later in the day.

The apex court on March 20 had issued amendments to the SC/ST Act, striking down the provision of immediate arrest. The two-judge bench also issued a ruling allowing the accused to seek anticipatory bail.

The SC ruling came while hearing a plea of Subhash Mahajan, former technical education director, who was charged under the Atrocities Act based upon the complaint of his subordinate.

The bench of Justices Adarsh Kumar Goel and Uday Umesh Lalit contended with Mahajan's petition that the law was abused to prosecute him.