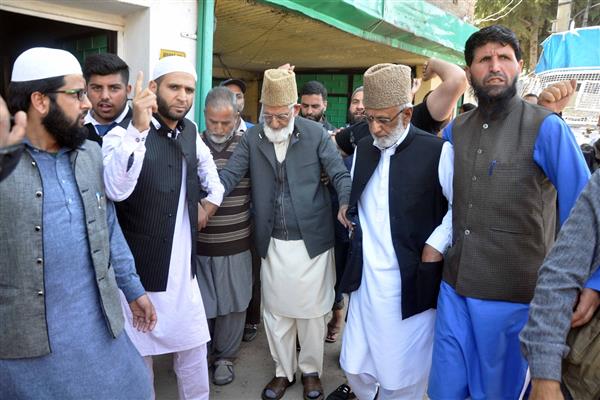 Accompanied by Tehreek-e-Hurriyat chairman Mohammad Ashraf Sehrai and his supporters, Syed Ali Geelani after a long period of eight years of his house confinement, made his first public appearance on Friday and addressed a public rally here.

Geelani was accorded a rousing reception and was taken from his residence amid pro-freedom slogans to nearby masjid in Hyderpora.

Quoting verse from Holy Quran, Syed Ali Geelani in his brief speech reminded the people about the unending tale of unmatched sacrifices of the Kashmiri people since past seven decades against the tyrannical rule and stressed to illustrate steadfastness and commitment with ongoing resistance against Indian occupation.

On the occasion Syed Ali Geelani cautioned the people against divide and rule policy of pro-Indian factions and stressed to forge unity among all those pursuing sacred mission.

Geelani asked people to repose faith in Almighty Allah and seek refuge in Him only as this will definitely infuse spirits and rejuvenate our will power against all brutalities and hardships we face while pursuing pious and sacred mission of martyrs.

“I, with a sincere heart, want to convey that we are yearning for peace and seek peaceful resolution to the long- pending Kashmir issue, said Geelani, saying, India needs to fulfil its promise of giving Kashmiris their right to self-determination to choose their future,” he said.

“We want to remind Indian authorities," Geelani said that, "we are not demanding any part of India be separated but made it clear Jammu & Kashmir is a disputed territory which needs a resolution in accordance with resolutions presented by India itself before UN on January 1948."

India is suffering from arrogance of power and is using an imperialistic and forced attitude in disputed territory of J&K, Geelani said in his address to people.

Syed Ali Geelani expressed his deep concern over the increasing, waywardness, liquor consumption, drug addiction and other social evils and in his fervent appeal to youth asked to play their effective and pivotal role to help to eradicate this menace from society.

While commenting over the future course of action, Huriyat chairman said that Joint resistance leadership will meet in near future to chalk out a fresh strategy. Geelani hailed youth for their passion, commitment and enthusiasm for freedom movement.

Later the Syed Ali Geelani was taken from the Masjid to his Hyderpora residence in a procession led by enthusiastic youth and the crowd shouted slogans of “Azadi” and expressed deep love and fondness with Geelani.