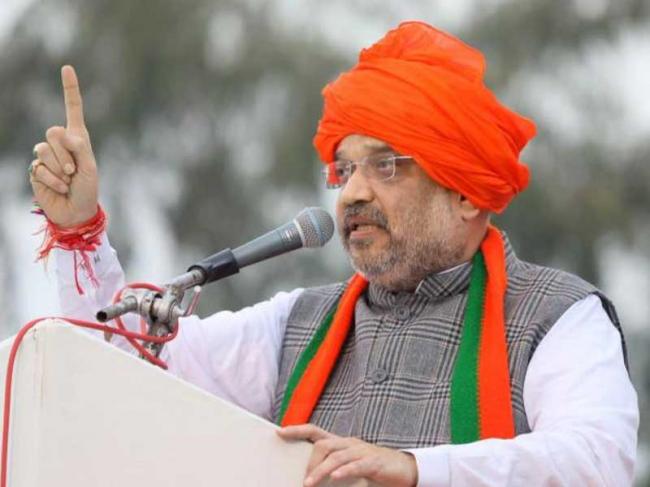 Amit Shah called BS Yeddyurappa as the 'most corrupt government' -- when he likely meant incumbent CM K Siddaramaiah of the rival Congress party -- thus providing the Congress the perfect fodder to attack him.

Amit Shah left his party embarrassed while addressing a meeting in Karnataka's Davanagere when he mistakenly said: "A retired Supreme Court judge recently said if there was ever a competition of the most corrupt government then the Yeddyurappa government is going to be number one."

When someone pointed it out to him, Shah quickly corrected himself.

The Congress took the oppurtunity and quickly spread the clip in attacking Shah and his party.

Karnataka Chief Minister Siddaramaiah was quick in attacking the BJP over the remark when he posted: "The #ShahOfLies finally speaks truth. Thank you @AmitShah."

Karnataka is one of the few states where Congress is currently in power.

The Congress has 123 seats and BJP 43 in the 225-member Karnataka Assembly.

"Now that the BJP IT cell has announced Karnataka elections, time for a sneak preview of our top secret campaign video!Gifted to us by the BJP President, our campaign in Karnataka is off to a fabulous start. He says Yeddyurappa ran the most corrupt Govt ever...True," Gandhi tweeted.

The Election Commission on Tuesday announced that the Karnataka election will be held in a single phase on May 12. The counting of votes will take place on May 15.

While the Congress is trying to return to power for the second consecutive term, the BJP is aiming to wrest power in the state.

The battle of the state has turned into a tough contest between Karnataka Chief Minister Siddaramaiah and former CM, B.S. Yeddyurappa, who is the BJP's chief ministerial candidate.