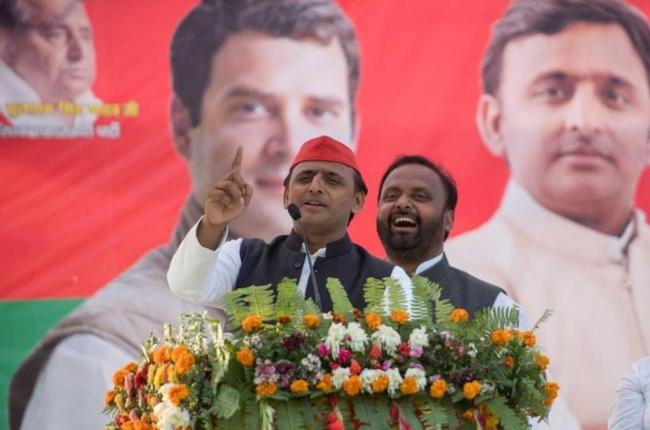 Lucknow, Mar 14 (IBNS): After his party registered victory in the two Lok Sabha seats in Uttar Pradesh in the recently held by-polls, Samajwadi Party chief Akhilesh Yadav on Wednesday attacked the ruling BJP and said victory in the bastion of Chief Minister Yogi Adityanath sent a strong message before the upcoming Lok Sabha polls in 2019.

He thanked Mayawati's BSP and other political parties for supporting his party in the polls.

"BJP has not been able to fulfill the promises it made before the polls. The result of the polls is a reflection of it," he told media.

"I want to thank BSP for her party's support in this crucial poll," he said.

"I also want to all other political parties for their support," the former Uttar Pradesh CM said.

He said issues like GST and note ban have hit the country badly and the results reflected the opinion of the people towards the Centre's move.

"I am happy that people from different sections of society have helped in winning he polls," he said.

He said the Centre and the Uttar Pradesh governments have only made people of India 'sad'.

Uttar Pradesh Chief Minister Yogi Adityanath on Wednesday said the result of the by-polls in his state, in which his party suffered defeat, was 'unexpected'.

Speaking to media, he said: "We are accepting the verdict of the people."

He said: "This result is unexpected."

Yogi said the result of the by-polls will be reviewed.

He congratulated the candidates who won the polls.

SP's candidate Nagendra Pratap Singh Patel defeated his opponent from the BJP  Kaushlendra Singh Patel by a margin of 59,613 votes.

SP is also ahead in the Gorakhpur by-polls where counting is still on.

The contest in the seat is going on between Praveen Nishad of SP and Upendra Dutt Shukla of the ruling party.

Meanwhile, in Bihar, RJD candidate Sarfaraz Alam is ahead in the Araria  LS seat.