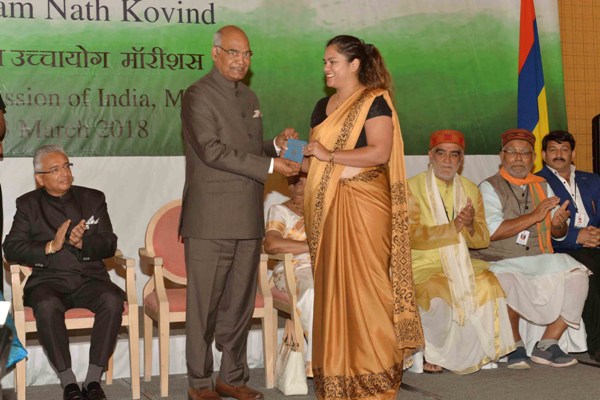 He also launched the World Hindi Secretariat’s logo, an Early Digital Learning Programme as well unveiled foundation stones of a social housing project and a large ENT hospital being built with Indian assistance.

Addressing the gathering, the President said that Hindi has played an important role in society and culture in both India and Mauritius.

It is a global language and the Indian community, spread across the world, has preserved its culture and traditions – and passed it to the next generation – through its linguistic traditions, including Hindi.

Hindi is being taught in about 175 universities in various countries.

The President noted that the 11th World Hindi Conference is going to be held in Mauritius in August 2018.

Apart from India, Mauritius is the only country where this conference is being hosted for a third time.

This is evidence of the affection of the people of Mauritius for Hindi.

Later in the day, the President addressed the Indian diaspora at a reception hosted by the High Commissioner of India in Mauritius.

Speaking on the occasion, the President said that in India we rejoice at the remarkable success of our brothers and sisters who left Indian shores many generations ago and have achieved great material success while cherishing their spiritual values.

Since time immemorial, Indian life and society have been defined by “VasudhaivaKutumbakum”, meaning the whole world is our family.

This is even more so for Mauritius, with whom we are linked by blood and sweat.

The President said that today, more than ever, India wants to connect with its diaspora. To this end, we have made special provision for Mauritius in our OCI scheme. The President invited members of the Indian diaspora to visit and participate in programmes of the PravasiBharatiya Kendra in Delhi.

He was happy to note that young Mauritians have already started to connect with the Kendra.

"We must use our diaspora networks and platforms for connecting with India and for engaging with others in different parts of the world," he said.

On Wednesday morning, the President will leave for Madagascar for the final leg of his two-nation state visit. He will become the first Indian President to visit Madagascar.