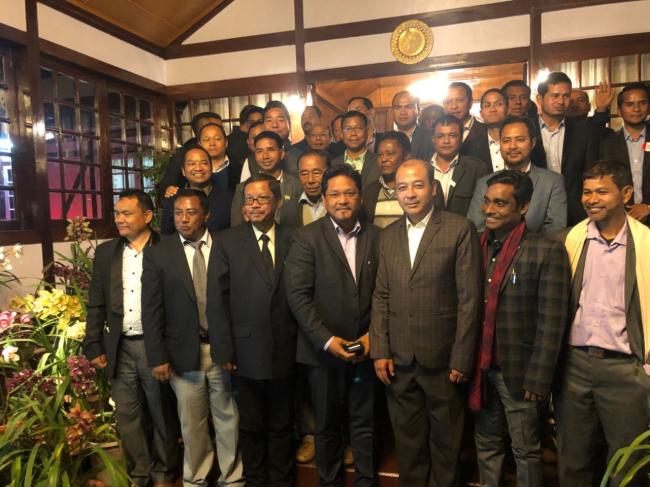 While the Meghalaya polls threw a hung verdict, all the regional parties and BJP agreed to support the NPP to form a non-Congress government in the state.

After the meeting with the Meghalaya governor, Assam minister and senior BJP leader Himanta Biswa Sarma said that, 34 newly elected MLAs have extended their support to Conrad Sangma to form a new non-Congress government.

“Among them 2 are from BJP, 19 of NPP, 6 of UDP, 4 of PDF, 2 of HSPDP and one Independent MLA. The governor asked Conrad Sangma to form the new government on March 6,” Himanta Biswa Sarma said.

The BJP leader also said that UDP has not demanded any Deputy CM post and one BJP minister will be inducted in the new government.

Sources said that, Conrad Sangma will be sworn in as new Chief Minister of Meghalaya during a grand function to be held at Polo ground, Shillong.

Meanwhile, Meghalaya CM Mukul Sangma had submitted his resignation letter to the governor.

The political scenario in Meghalaya has dramatically changed after UDP leader and former Meghalaya CM Dr Donkupar Roy said his party has decided to extend support to NPP and Conrad Sangma.

Earlier, Minister of State for Home and senior BJP leader Kiren Rijiju had met the UDP leader urged to unite to form a non-Congress government.