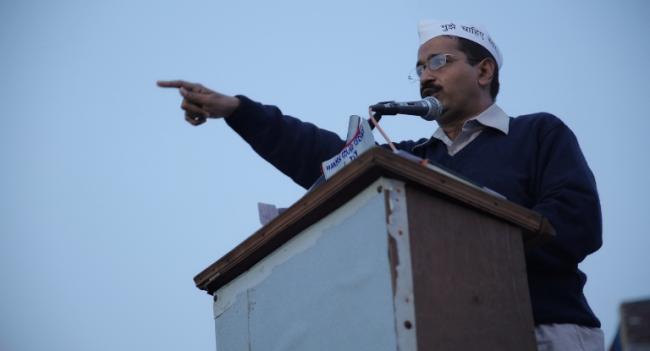 BJP govt should give specific timelines by when will they bring Vijay Mallya and Nirav Modi back to India: Arvind Kejriwal

New Delhi, Feb 16 (IBNS): Delhi Chief Minister Arvind Kejriwal on Friday asked the BJP government at the Centre to specify a timeline by which Vijay Mallya and Nirav Modi will be brought back to India.

While Nirav Modi is  now at the centre of a probe into the Punjab National Bank fraud case, liquor baron Vijay Mallya is also wanted in India on charges of fraud and money laundering to the tune of Rs 9,0000 crore.

Mallya is currently in the UK.

"BJP govt shud give specific timelines by when will they bring Vijay Mallya and Neerav Modi back to India. By when will the money be recovered from them?," Kejriwal tweeted.

Meanwhile, the Government on Friday announced that the passport of the fugitive billionaire   Nirav Modi, the prime accused in the Rs. 11,292-crore Punjab National Bank fraud case, and his business partner Mehul Choksi have  been cancelled for four weeks.

“On the advice of the Enforcement Directorate, the passport issuing authority in the Ministry of External Affairs has suspended the validity of passports of Mr. Nirav Deepak Modi and Mr. Mehul Chinubhai Choksi with immediate effect for a period of four weeks u/s 10(A) of the Passports Act 1967,” the Ministry of External Affairs said in a press release.

The diffusion notice is a request for cooperation or alert mechanism, less formal than an actual Notice but is also used to request the arrest or location of an individual or additional information in relation to a police investigation.

While the Central Bureau of Investigation (CBI) has registered two cases against Modi, the Enforcement Directorate (ED) has reportedly seized gold and diamond worth Rs 5,500 crores from the searches conducted at 17 properties of  the diamond merchant across India.

The ED  has issued summons for appearance to diamond merchant  Modi and  Choksi in connection with alleged money laundering.

They said both Modi and Choksi were summoned under the Prevention of Money Laundering Act (PMLA) and asked to depose within a week’s time.

CBI has registered an FIR against Mehul Choksi's Gitanjali Group of companies on the complaint of Punjab National Bank (PNB).

The agency  is still conducting searches at locations of Gitanjali Group Companies at 20 places in six cities across the country.

On February 14,  the CBI received complaints from PNB, which detected a Rs 11,292 crore fraud involving  Modi.