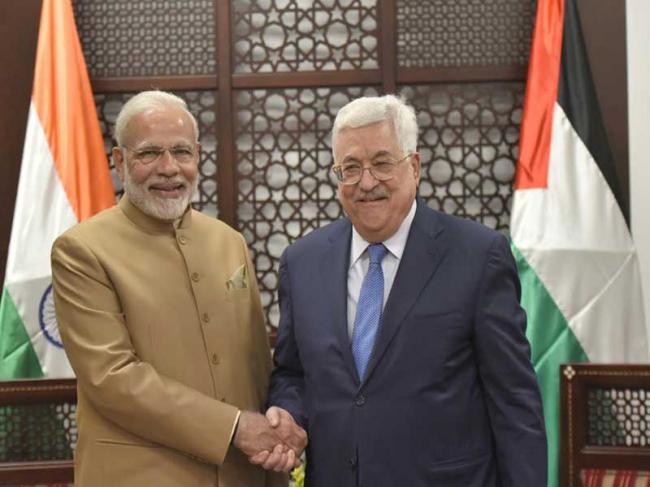 Modi is currently visiting the nation.

"Friendship between India and Palestine has stood the test of time. The people of Palestine have shown remarkable courage in the face of several challenges. India will always support Palestine’s development journey," Modi tweeted.

He said it was an honour for him to visit Palestine.

" I consider it an honour to be in Palestine. I bring with me the goodwill and greetings of the people of India," the Indian PM said.

He said: " I am glad that India and Palestine are cooperating extensively in key sectors such as technology, training and infrastructure development."

Modi was on Saturday  conferred with the 'Grand Collar of the State of Palestine' by President Mahmoud Abbas in recognition to his  contribution to promote relations between India and Palestine.

President Abbas conferred the Grand Collar, highest order of honour given to foreign dignitaries, on Modi after the conclusion of the bilateral meeting between the two leaders.

Modi is the first Indian Prime Minister to make an official visit to Palestine.

In the past the Grand Collar of the State of Palestine was awarded to King Salman of Saudi Arabia, King Hamad of Bahrain, President Xi Jinping of China, amongst others.

Earlier, Prime Minister Modi was accorded ceremonial guard of honour at Al-Muqata'a, the compound of the presidential headquarters in Palestine's Ramallah on his historic visit on Saturday.

PM Modi arrived in  Ramallah from Amman, Jordan, which he visited as part of his three-nation tour-the two other countries being ,United Arab Emirates and Oman.

"Reached Palestine. This is a historic visit that will lead to stronger bilateral cooperation," tweeted PM Modi

The Ministry of External Affairs said he arrived in  a chopper provided by Jordan government and escorted by choppers from Israel Air Force.

On his arrival, Modi  laid a wreath at Mausoleum of Palestinian leader Yasser Arafat.