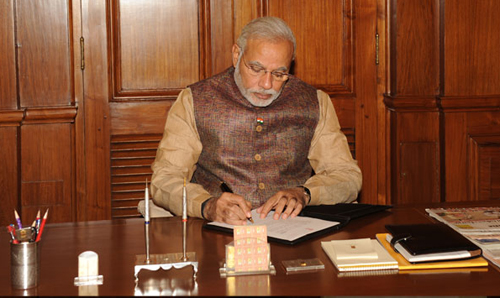 Modi launches scheme to ensure bank account for everyone

At the same function at Vigyan Bhavan here, he said an Indian card should have the power of a VISA card and be accepted in any part of the world, hinting the shape of things in the sector being planned by his government.

The bank account scheme is a pet project of the PM, titled "the  Pradhan Mantri Jan Dhan Yojana" or People's Wealth scheme.

"Financial inclusion is our duty and we are doing our duty. All these efforts are for the poor and to become free from poverty ," said the PM adding that now the poor will also flaunt a debit card like a rich who uses it after an expensive food in a nice place.

"The poor are going get renewed strength to fight poverty," said the PM on the launching of Jan Dhan Yojana.

"When these bank accounts are opened, imagine the difference it will make in the lives of women. They will bless us," he said, adding that often a woman battling his husband who spends all on intoxication is at the wit's end to hide the money.

"If we want to get free from poverty we need to end financial untouchability," said Modi, adding "when a bank account is opened, its a step towards joining the economic mainstream."

"When banks were nationalised, what kind of dreams we people seeing. Yet, so many people are not linked to this even now," he said.

"This may be a record even in the banking sector. And the biggest strength is it will boost confidence of those sitting in Governments too," he said referring to the opening of 1.5 crore accounts a on the first day.

Union Finance Minister Arun Jaitley said 7.5 crore people will be covered by the scheme by January 25, 2015.

Union Commerce and Industry Minister Nirmala Sitharaman said: "We aim to cover each and every household with JanDhanYojna."