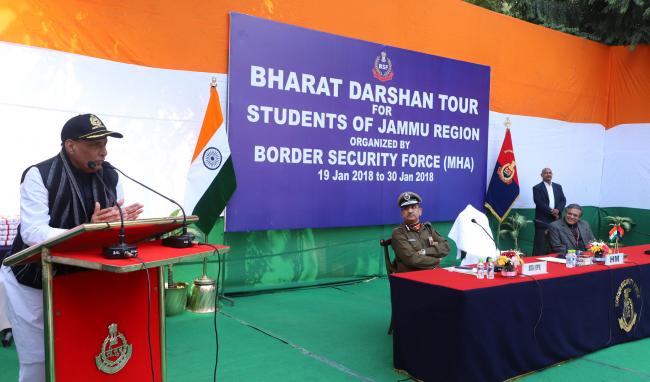 The concept of Bharat Darshan Tours for the children from Jammu & Kashmir was started as an annual feature in the year 2000.

Rajesh Ranjan, SDG BSF apprised the Home Minister Rajnath Singh of the composition of the group. He informed that Bharat Darshan tour has widened horizons and given the children an opportunity to see the diversities of the nation.

The children then shared their experiences of visits to different historical places and thanked the BSF and the Government of India for organizing tours of this nature.

While addressing the children, Rajnath Singh desired to communicate the experiences gained during this tour to the remote areas from where all have come. It was also told that the anti-national elements should not overpower the thoughts of national integration.

A token of remembrance has been given to the Home Minister by the children.

These children are selected for Bharat Darshan as a part of intensive civic action programme of the force in remote and backward areas of the border.

This tour is conducted to give them insights into the rich historical, cultural and social profile of the country and the progress made in industrial, technological and scientific fields. The tour also aims at inculcating in them a sense of pride for the nation.

After meeting with the Home Minister, all the children will proceed to  Amritsar where they will witness the Retreat Ceremony at Attari Border and also visit the historical places of Amritsar.

Till date 1619 children from J&K have participated in BSF sponsored 58 Bharat Darshan Tours.