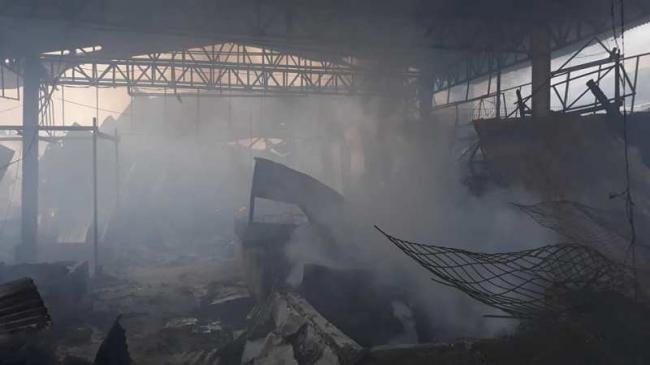 According to reports, the fire was first seen at around 1:40 am. at Gorabazar market in north Dumdum. It has been alleged that the fire spread quickly as several inflammable objects were stored where the fire started.

A nationalized bank's branch office and several shops, near the market, were ablaze too.

As many as 22 fire tenders rushed to the scene and firemen fought for hours to bring the blaze under control.

Disaster Management Group (DMG) personnel rescued two people from the burning market and sent them to a nearby hospital.

Bodies of two persons were found inside a shop later.

A local police official told IBNS that the deceased have been identified as Sunil Sahu, who run a shop inside the market, and Vicky Sahu, who worked in the shop.

"These men were sleeping inside a closed shop when the fire broke out and they possibly died due to suffocation," the official added.

A senior official of state fire and emergency services said that cooling off process is still underway at the scene.

According to locals, nearly 200 shops were gutted completely and goods worth more than Rs. 1 crore were burnt due to the massive blaze. Portions of a nationalized bank and few nearby residential buildings were partly damaged, they said.

Meanwhile, local police and the fire department have started an investigation into the cause of the fire.