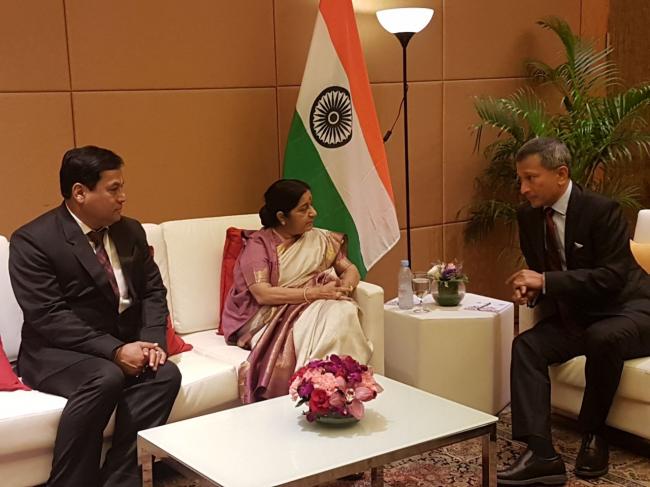 Guwahati, Jan 7 (IBNS) : Reiterating State Government’s resolve in playing a proactive role towards the success of Act East Policy, Assam Chief Minister Sarbananda Sonowal said that his government is hell bound in stepping up its efforts in increasing interactions with ASEAN countries including enhancing people to people contact and trade and other relations.

Addressing a Pravasi Bharatiya Divas in Singapore on Sunday, Sonowal while expressing his gratitude to Prime Minister Narendra Modi for keeping Assam and other North Eastern States at the heart of Act East Policy, said that Assam Government is working very hard for making Guwahati, the state capital India’s gateway to South East Asian Nations.

“We have land borders with Myanmar. Many of ASEAN capitals are within 2,000 kilometre flying distance from Guwahati which is comparable to flying distance of Guwahati to many Indian cities. We are keen to start flights between Guwahati and ASEAN capitals. The construction of a new terminal building at Guwahati airport is going to start soon. There is a motorable road link, the ASEAN trilateral highway connecting North East and ASEAN,” Sonowal said.

Sonowal moreover reiterated that Assam is the largest among 8 Northeastern States of India with a population of 33 million and the state is blessed with large variety of natural resources and very rich bio-diversity. Assam is dotted with five National Parks and 18 Wildlife sanctuaries.

“Recognizing this wealth as our fundamental strength, our vision is to grow in economy with the growth of ecology and we have decided to plant 100 million trees every year in a mission mode to make the state to be a front-runner and join the Global efforts against climate change,” the Assam CM said.

Speaking about the verdant water resources in the State, Sonowal said that both the Brahmaputra and Barak along with their many tributaries have a huge potential for river transport, tourism and industry.

“In order to make the rivers navigable, dredging has been taken up both in Barak and Brahmaputra to facilitate state’s access to the Bay of Bengal through Chittagong port in Bangladesh in near future. The State ranks 3rd amongst the raw silk producing states in India. Over 80 percent Muga silk and over 60 per cent of Eri silk produced in India comes from Assam. The North Eastern region has the highest concentration of Bamboo resources in the country. Assam Tea is famous throughout the world. Assam has around 850 tea gardens and 1,30,000 small tea growers. Moreover, 20 golf courses and heritage clubs embedded in the scenic tea gardens provides a huge impetus to tea tourism. The Petroleum industry in India started at Digboi in Assam and the state today has four refineries and significant petroleum as well as natural gas reserves,” Sonowal said.

On the sidelines of the Pravasi Bharatiya Divas, the Assam CM kick started a roadshow of Advantage Assam: Global Investors' Summit at Singapore to reach out to the industrialists and investors across the globe.

As a part of the roadshow, Chief Minister Sonowal in a move to woo investors, presented the business landscape of the State especially 'ease of doing business', 'single window clearance system', 'skilled work force' and state's verdant natural resources before a galaxy of business leaders.

Moreover, leaving no stone unturned to elicit maximum response from Assamese diaspora living in Singapore, Sonowal also interacted and presented before the members of Assam Association, Singapore the State Government’s initiatives for the Global Investors’ Summit to be held at Guwahati on February 3-4.

Moreover the government has proposed to notify 160 kilometre long industrial corridor near Guwahati to scale up industrial development in the state.

Thanking Union Foreign Affairs Minister Sushma Swaraj for helping the State in holding the Global Investors’ Summit, Sonowal invited the Indian diaspora in Singapore and other ASEAN countries to play a significant role in bringing investment, promoting tourism and people to people exchange between Assam and ASEAN countries.

“It is a year of milestones. India and ASEAN relationship becomes 25 years old and since then our ties of partnership has evolved into a strategic partnership. ASEAN region is at the height of our Act East Policy and as a symbol of that Chief Minister of Assam Sarbananda Sonowal is attending the Pravasi Bharatiya Divas,” the External Affairs Minister said.

Further mentioning Assam CM Sarbananda Sonowal as the ‘symbol of resurgence of India’s north-east’, Swaraj said that, our north-east region will prosper when there is greater collective push with South East Asia and North East becomes a pitch to South East Asia. It is important to realize their growth for India-ASEAN ties.

“As Indian economy grows, our ties will deepen, our trade will be cheaper and investment flow will grow”, she said adding that the Indian states play a vital role in the progress of the country and they are important in advancing India’s economic ties with the world,” Swaraj said.